According to The Zimbabwean, former Air Zimbabwe head Peter Chikumba has been appointed CEO of Celebration Ministries International (CMI).

CMI founder and head, Tom Deuschle praised Chikumba as an effective manager, judging by his achievements under difficult conditions at Air Zimbabwe.

Accepting the appointment, Chikumba said: “Having worked for 35 years, I believe that God is saying it’s time for me to serve him.”

Chikumba is the only professional CEO to serve out his contract at the troubled airline. He is credited with keeping the heavily indebted airline afloat during troubled times. 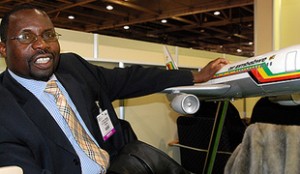 Chikumba was known as a no-nonsense boss who famously forced President Robert Mugabe and senior regime officials to pay cash for their regular jaunts.

His contract was not renewed, however, after he authorised trimming of the airline to get rid of non-essential staff, many of them party appointees. He lost the case after labour court ordered reinstatement of 400 employees.

Air Zimbabwe is currently operating at $2 million a month loss, with debts amounting to more than $60 million.

Efforts by the government to find an equity partner have been jaded by the debts, an ageing fleet and reports of over-staffing. Chikumba is not the first to give up professional life for the cloth.