“God will not let us down”, says Tsvangirai 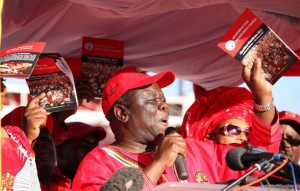 “God will not let us down”, says Tsvangirai during the launch of his party’s manifesto in Marondera. (photo: M.Chibaya).

MDC-T presidential candidate Morgan Tsvangirai Sunday said God will make his party triumph in the forth-coming harmonised elections that he says are not going to be free and fair no matter who wins the election.

Tsvangirai, who was addressing thousands of people at Rudhaka stadium in Marondera in Mashonaland East to launch his party’s manifesto, said they are now getting into an election without the agreed reforms.

“We are here to provide the people of Zimbabwe a better future. We are face with an election without reforms and against a leopard that has remained faithful to its spots.

“But our faith in God and our collective desire for real transformation will make us triumph over the setbacks we have experienced. What we aimed at, that the reforms be implemented according to SADC have not be achieved but because we are a people that believe and have faith in God we know that we will succeed,” Tsvangirai confidently said.

Tsvangirai added: “I don’t think that God want Zimbabwe to remain in a permanent state of suffering. I don’t think God made us a sacrifice that we as the children of Zimbabwe we should suffer forever and ever.”

The MDC leader said through faith his party is going to win the election.

“Even as we participate in these polls with a hurt heart…we are ready to defeat Zanu PF. We have tried in Government for the past four years against serious from our counterparts in government to make sure that this country is prepared for a genuine free, fair and credible election.

“Regrettably what we have witnessed in the last few weeks is a contested effort designed to rob election of legitimacy before it has even began,” Tsvangirai said.

Under intense regional pressure, Tsvangirai and his rival President Robert Mugabe formed a power-sharing government in 2009 to avoid a complete meltdown in the country, whose economy had collapsed under world-record hyperinflation after a bloody presidential run-off election that left more than 200 Tsvangirai supporters dead.