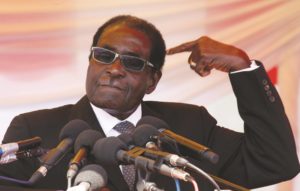 Zimbabwe’s President Robert Mugabe has on various occasions labeled LGBTI people “worse than dogs” and has used international fora to castigate them.

In a country where homosexuality is criminalized and authorities and religious leaders often shun and demonize LGBTI people, one Pentecostal church outside Harare is encouraging survivors of sexual violence to speak up.

Zimbabwe’s President Robert Mugabe has on various occasions labeled LGBTI people “worse than dogs” and has used international fora to castigate them.

In this Southern African country where homosexuality is criminalized by authorities and religious leaders often shun and demonize LGBTI people, many sexual minorities suffer in silence after being abused or harassed.

Chido, a GALZ member who prefers to use only her first name for security reasons, knows the feelings of ostracization all too well. Tears wet her cheeks as she discusses the neglect, stigma and abuse she has faced from close relatives and religious leaders because of her sexuality.

“After my relatives discovered that I was somehow ‘strange’ to them, my uncle who I was staying with forced me to have sex with him several times. I was just 16. He said that was the only way of ‘correcting’ me,” the now 29-year-old mother of one told RelZim.

“I got pregnant when I was 19 as a result of these sexual encounters with my uncle, just after writing my A Level exams. He chased me, and I had to live with my grandmother in the rural area since my parents are dead. For the next two years, I was holed in the remote Muzarabani district until a good Samaritan decided to pay for my university education. I had to leave my son with my grandmother,” she said.

Amid her distress, Chido said she found no solace from local churches.

“The pastor shunned me after I told him about my predicament. At one point, I was contemplating suicide,” she said.

“My case is just a tip of the iceberg of many cases in Zimbabwe. I am a living testimony that one can be abused because of his or her sexual orientation,” Chido said.

Gracious Light Ministries, a Pentecostal church, gives counseling and legal help to LGBTI people and others who have been sexually abused. Through support groups, they encourage survivors to talk about their abuses and find solidarity in their shared struggles.

Pastor Humbe said the church should be a safe haven for everyone regardless of his or her sexual orientation.

“I provide counseling to everyone. I am a minister and a servant of the Lord. It is not up to me to judge,” he said. Everyone is welcome here, and I believe we are all equal in the eyes of the Lord.”

Humbe’s sentiments have drawn rebuke from local Seventh Day Adventist Church Pastor Sikhumbuzo Dube, the author of “Sodom Has Bounced Back: A response to Contemporary Challenges Faced by Young Christians,” who says gays and lesbians should have no place in the clergy and church membership.

“It is a sin, and the church should not tolerate such practices,” Dube said of homosexuality. “The LGBTIs do not need counseling but to be told point blank that what they are doing is a sin.”

Dube said his book, which is popular among Seventh Day Adventists in the country, discusses what he believes motivated the Lord to destroy Sodom and Gomorrah in biblical times.

Another popular preacher in Zimbabwe Emmanuel Makandiwa has described LGBTI people as “mentally sick” in a sermon broadcast on his television channel Christ TV.

Faced with such statements, GALZ said churches should rather foster love, unity, empathy and cohesion.

“When we talk about gays and lesbians, the police forget that they have rights just like anyone,” said SRC Programs Officer Nombulelo Madonko. “Because of fear and rebuke, [sexual minorities] become faceless. We believe sex should not be a taboo, and there is nothing wrong with consensual sex between adults regardless of their sexual orientation.”

Dumisani Nkomo, chief executive officer of the Zimbabwe human rights NGO Habakkuk Trust, said every citizen is entitled to dignity, privacy and the enjoyment of all rights.

“I do not believe gays or lesbians should be discriminated against or should be persecuted or discriminated because, like everyone, they are human beings. What everyone does in their bedroom is none of people’s business,” he said.

Zimbabwe’s former sodomy law was changed to a ‘sexual deviancy’ provision in 2013 under Section 73 of the country’s Criminal Code. According to the law, it is an offense for two people of the same sex to kiss or have sex.

Section 4.78 of Zimbabwe’s constitution reads, “Persons of the same sex are prohibited from marrying each other.”

“Any harassment and persecution based on sexual orientation is a monumental tragedy and also a violation of international human rights law,” he said.

Chido says she is still waiting for the day when people in Zimbabwe won’t be stigmatized because of their sexual orientation.

“It is my hope and wish that one day we will all be equal before the law regardless of one’s sexual orientation. I look forward to the day when victims of sexual abuse because of their sexual inclination will see justice,” she said.