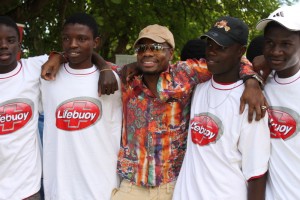 Gospel artist Kirk Franklin with disadvantaged youths during his visit to Saint Joseph's Hostel for Boys (photo by the author).

US-based international gospel artist Kirk Franklin on Tuesday urged orphans and abandoned children in Zimbabwe to have faith in God as their fortunes can turn for the better if they believe in the power of the Almighty.

Speaking to disadvantaged boys during a visit to Saint Joseph’s Hostel for Boys in Harare just hours before his one-off concert in Zimbabwe, Franklin said that there is hope and opportunity for the disadvantaged youths if they believe that there is still hope to be better people. “Failure is not an option,” he told the boys. “By God’s grace your lives can get better. You have the chance to emulate or even get better than me.”

Franklin revealed that he himself was adopted by a 64-year-old widow after he was abandoned by both his parents when he was still a child. “We lived in ghettos and had to take beer cans and newspapers and sell these. That is how we managed to live and buy clothes.”

Franklin also said he had to sleep on the floor or at the back of cars and had to quit school due to lack of funds . For many nights, he also slept hungry as his adapted family struggled to survive due to poverty. “I know how it feels to be abandoned and to have only God’s love. If you believe in God your story can up as my story. Be strong, maintain your faith and believe that God has a bigger plan for you.”

Saint Joseph’s Hostel for Boys is a non-denominational institution that looks after disadvantaged boys. It is located in Belvedere and has been operational since 1953. It caters for 55 boys.

Franklin began his African tour in Nigeria last Friday, and has also performed in Zambia on Monday and Zimbabwe yesterday.

The contemporary gospel icon is on something of a comeback after the release of his 11th studio album Hello Fear earlier this year – his first in four years.