“Gospel Times” editor: to give hope to the hopeless, it is high time we publish good news 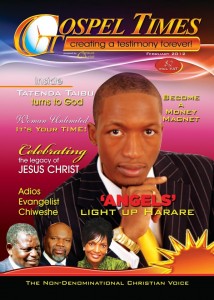 Christians in Bulawayo have welcomed the arrival of yet another Christian magazine Gospel Times that hit the streets of the second-largest city in February this year.

Leslie Phiri, the magazine’s editor and Chayah Media Services director, told RelZim they were grateful to the Almighty for blessing them with a vision to start the project, whose objective he said is to propagate the great commission. He said they want to take the gospel of Jesus Christ to the uttermost parts of the world. “We have received positive feedback from both the church and the corporate sector. We managed to sell out our inaugural issue of Gospel Times, and the second edition which is currently in circulation is doing fairly well.”

Phiri added, “Our [mainstream] media is marred by negative reports. There is this notion that bad news makes good news but we believe it is high time we publish good news, positive news that is going to give hope to the hopeless. We believe these are the Gospel times.”

“This is a good initiative in as far as the Christian voice is concerned in Zimbabwe,” said Lungile Hadebe of Tshabalala. “However, I still feel there is a lot that they need to do in terms of their target audience. It is actually difficult to target all Christians regardless of denominations. At the end of the day, you find yourself tilting towards one denomination which may not necessarily be liked by other denominations,” she added. Hadebe added that Gospel Times publishers should be holistic in their approach to the Christian world.

Muzi said it would be good if the magazine carried articles in which church doctrines clash and provide for clear understanding and harmonization.

Nevertheless, other people who spoke to RelZim said they were excited by the quality of the magazine which is reportedly printed in South Africa.