The Government of Zimbabwe in partnership with UNICEF  is training some members of the Apostolic sects (Vapostori) in order to recruit them as health practitioners. 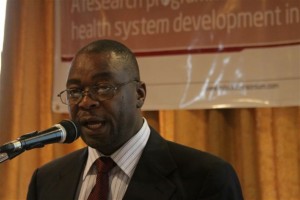 Deputy Minister of the Ministry of Health and Child Welfare, Douglas Mombeshora, said, “Last year we trained about 400 health workers with the assistance of UNICEF. Now, when they have some of their members as health practitioners, it is easy for them to utilize health facilities.”

Vapostori members are often prohibited by their credo from seeking treatment in hospitals or taking conventional medicine when they fall ill. The radical sects believe conventional medicine is evil. Members who seek modern medical care risk punishment from church leaders including suspension or excommunication.

Deputy Minister, Douglas Mombeshora, said that by engaging the various Apostolic church members fully on these and other issues, the much sought-after breakthrough will be realized.

A member of an Apostolic church who spoke on condition of anonymity summed up the myths which continue to blind many Apostolic members when he shared on how the church elders advise the church members concerning HIV/AIDS. “When the issue of the HIV/AIDS pandemic began to gather momentum in the country, our church leader told us that the spirit advised us to ignore the pandemic because the tablets were to run out and that they would all die. So we were advised to use the holy water [muteuro].“

The Zimbabwean government is currently supporting efforts towards access to prevention of mother-to-child-transmission (PMTCT) services.  In partnership with the national PMTCT Partnership Forum, the government is seeking to lower infant mortality rates, minimize mother-to-child transmission of HIV,  as well as to create and promote better understanding of women’s and children’s rights.

According to a research carried out by UNICEF, the religious teaching, doctrine and regulations of ultra-conservative Apostolic groups such as Johanne Marange, Johanne Masowe Sabbath (ye Sabata), Madhidha  tend to undermine the usage of modern health services because of their emphases on faith healing and strict adherence to church beliefs and practices. Violation of church doctrine attracts social sanctions, which include confession, shaming (order not to wear church regalia or kubviswa gamenzi), as well as re-baptism (kujorodwa).

The collapse of Zimbabwe’s healthcare infrastructure over the past decade has also impeded efforts to get Apostolic churches to embrace modern medicine.

Apostolics to be banned from open-air worship in Bulawayo. Moved to council schools