Have you already seen one of those  billboards around that inform you: Judgment Day is coming May 21, 2011?

Family Radio, an U.S. evangelical Christian group, says it has erected some 2,000 ads in 40 countries around the world advising of the Second Coming and salvation for true believers. 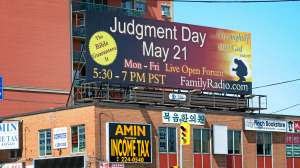 Harold Camping, Family Radio’s president, came up with May 21, 2011, “from evidence found in the Bible,” their website says. He determined that Christ’s Second Coming would happen on that date, which he claims is the exact 7,000-year anniversary of Noah escaping destruction from the floods.

Dr.Richard Ascough, a Queen’s University religious studies professor and other scholars scorn such calculations, saying that biblical texts use symbolic language and don’t contain secret codes about the date of the end of the world.

Mr. Camping has been wrong before. He wrote a book predicting the world would end in 1994. Family Radio now says that “important subsequent biblical information” was not known at the time.