Jehovah’s Witnesses reach out to ethnic Chinese in Zimbabwe

As part of their reaching out to people of all nations with the Gospel, Jehovah’s Witnesses in Bulawayo have cast their net wider to the ethnic Chinese. 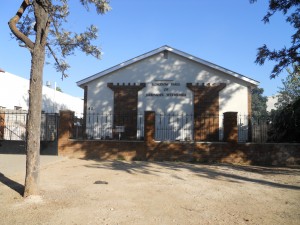 Jehovah's Witnesses Kingdom Hall in downtown Bulawayo serves as a meeting place for the Mandarin-speakers who want to learn about Jesus Christ.

Every Saturday, between 16:00 and 17:45 there is a congregation Bible study class, theocratic ministry and service meeting in Mandarin at the Kingdom Hall for the Bulawayo Central Congregation, situated  at corner G. Silundika and 2nd Avenue.

Two members of the church, who declined to be named, referring RelZim.org to their website, said the programme has been going on for quite some time, adding that they do not want to leave any stone unturned in reaching out to people, regardless of their races and colours.

On Sunday there is also a special public talk and Watch Tower study in Mandarin, in which the international church’s doctrine is fully explained to the converts. For locals, services are available in Ndebele and Shona on Saturdays and Sundays in the afternoons and mornings respectively. Sunday is also the day for the sign language congregation.

According to the church’s recent brochure, Jehovah’s Witnesses, who say they believe in the complete Bible of 66 books, explaining where they derive their name, have this to say, “It is a descriptive name, indicating that they bear witness to Jehovah, his godship and his purposes.”

Affirming the seriousness and truthfulness of their religion, the church’ brochure further reads: “Anyone who is serious about his religion should think that it is the right one. Otherwise why would he or she be involved in it?”

Jehovah’s Witnesses members are popular all over the world with their door-to-door and street evangelisation. While many churches believe in eternal life in heaven, Jehovah’s Witnesses believe that only a limited number of believers will go to heaven while the rest will live forever in paradise on earth.

The church, headquartered in Brooklyn, New York, United States of America, has its Kingdom Halls as congregation centres across the globe. In Bulawayo they have such centres in the city centre, Selbourne Park, Nkulumane, Cowdray Park among other suburbs.