Jewish preacher: differences between Christianity and Judaism are in their packaging

The differences between Christianity and Judaism are only in the packaging of the two religions. The rest is just the same says Dr. Eric Bloch, a Bulawayo Jewish preacher. Talking to RelZim.org on fundamentals of Judaism at his office on Thursday, July 21, Dr. Bloch said both Jews and Christians believe in the Supreme God and Creator.

Dr. Bloch gives weekly Sabbath sermons to more than 70 practising Jews in Bulawayo. “There is no big difference between Christianity and Judaism; the difference is in rituals, ways of observance and in some interpretations, but the essence is just the same,” he elaborated. Dr Bloch, who is also a renowned economist and has preached to Christians and given talks that touch on his religion, said he has nothing against Christians. “If I disliked Christianity, I wouldn’t be doing all this.”

He has preached among the followers of other religions. He delivered a message on the love of God to members of the Seventh Day Adventist Church (SDA) at Solusi University. During the Catholic Lent last April, Dr. Bloch gave a talk on how Jews celebrate their Passover to parishioners of Our Lady of Lourdes parish in Khumalo at the invitation of Fr. Charles Rensburg. However, unlike some branches of Christianity, Dr Bloch said, Judaism does not recognise the doctrine of the Trinity (Father, Son and the Holy Spirit) as constituting the God-head, arguing that Jews believe in God is an indivisible “single entity” – a belief in absolute monotheism.

There are currently  about 70 Jews in Bulawayo. However, not all of them are practicing. The figure used to be 3,000 45 years ago. Under the leadership of Mr. Hylton Solomon, Bulawayo Jews meet for their Sabbath services at the Sinai synagogue situated at the intersection of Coghlan Avenue 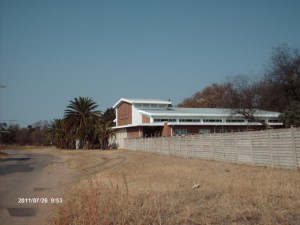 and Bailey Road in Khumalo low density suburb.   The Country Communities Rabbi is based in Cape Town, South Africa, and periodically flies into the country four times a year, explained Dr. Bloch. He said the same rabbi also serves several other Southern African countries.  There are about 20 million Jews worldwide, 6 million of which are in Israel, other 6 million in the USA, with still other 8 million in the rest of the world. In Zimbabwe their number is estimated at 400 people.

The Jewish Sabbath, like that of the SDA Church, begins on Friday sunset and ends at Saturday dusk. Believers congregate on Friday night, Saturday morning and Saturday evening. Followers of Judaism in Bulawayo also have the Jewish Old Age Home, opposite Hartsfields Rugby Stadium along Robert Mugabe Way, where they sometimes meet for other religious rites during the week. However, due to the requirement that there must be at least ten adult males in every service (which is not always possible during the week) the congregation is limited to the Sabbaths that fall on the weekend. Before moving to the Sinai synagogue in Khumalo, practising Jews congregated at the Bulawayo City Tabernacle located at corner Jason Moyo Street and 3rd Avenue.

The other Jewish special services include a service for every new month, according to the religion’s lunar calendar and other special fast days like the 17th Tammuz, aswell as on the Jewish Festivals. All services are conducted primarily in Hebrew with translations into English for those who are not conversant in the ancient language. Dr. Bloch said Judaism has strict Biblical dietary laws meant to preserve holiness of members. For example after having meat, Jews have to wait for an interval of between three to six hours before taking milk. They base that on Exodus 23:19: “Thou shall not eat a kid in his mother’s milk.” Non-ruminant animals among other specified animals, such as pigs, are considered unclean and unfit for human consumption in the Jewish religion.

Asked if Judaism was open to non-Jews, Dr. Bloch said it is not easy for people of other religions and nations to be part of the religion. The rabbis teach that if outsiders come expressing interest in Judaism, they must be refused three times in a bid to test their seriousness. When they come for the fourth time then they can be admitted into the Jewish community. Jews, Dr. Bloch explained, believe that Jesus Christ is one of the greatest preachers that ever lived and that God is going to send the Messiah, who is not necessarily Jesus. He said the coming of the Messiah would be heralded by Prophet Elijah.