When we meet in a New York café, Stella Cohen is far from home, which is Harare, Zimbabwe. She’s also far from the roots of her cooking, which is the island of Rhodes, in Greece. But for Cohen, a cookbook writer, artist, textile designer and communal leader, the past has eternal dimensions — evoked through food and stories — and seems always present.

She has just published Stella’s Sephardic Table (Hoberman Collection), a loving tribute to Rhodesli (the Jews of Rhodes) cuisine and culture. While the large-format cookbook is elegant, with lush color photography and gold edges, it is meant to be used, with explanations of ingredients and detailed instructions. Most of the recipes are accompanied by full-color photographs by Marc Hoberman that showcase the author’s art of presentation; some include step-by-step photographs. Many pages include Ladino proverbs, and the book reflects a tradition of hospitality. “El ke alarga la meza, alarga la vida,” or, ‘The one who extends the table, lengthens their life.”

In an introductory essay, Jane Gerber, professor of Jewish history and director of the Institute for Sephardic Studies at the Graduate Center of CUNY, explains that within decades after their brutal expulsion from Spain in 1492, Jewish refugees were building “new and vibrant centres of Jewish civilization throughout the eastern Mediterranean and North Africa.”

The island of Rhodes came to be known as La Chica Yerushalayim, the Little Jerusalem. For centuries, the Jewish community in Rhodes thrived, although many Jews began to leave in the early 20th century to escape the lawlessness and oppression of the declining Ottoman empire; they scattered to North and South America, Palestine and sub-Saharan Africa. In 1931, a Sephardic community of Rhodeslis was established in what was then Rhodesia.

Cohen dedicates the book to her foremothers, to her great-grandmother, great aunt, grandmother and “all the women of Rhodes Island who were the keepers of knowledge, traditions and spirituality of my Sephardic culinary heritage. The book encapsulates for posterity their extraordinary gastronomic skills, honed over time and tragically snuffed out by their deportation to Auschwitz in 1944.”Those who remained in Rhodes faced a tragic end: In July 1944, 1,600 Jews were sent to Nazi concentration camps, and most of them were murdered soon after arrival. 150 Jews of Rhodes survived.

The author was born in Harare. Her mother left the village of Marmaris, Turkey (considered an extension of the larger Jewish community of Rhodes) in 1936 and settled in the Belgian Congo. Cohen’s father, who was born in Rhodes, borrowed money to leave alone in 1936 to find work in Southern Rhodesia, planning to send for his parents and siblings.

Her family was invited by Cecil Rhodes. As a volunteer “to help improve the quality of life in Zimbabwe,” Cohen became a close friend with Sally Mugabe, the late wife of President Robert Mugabe. Assuring Masha Leon from The Jewish Daily Forward that the Jewish and Zimbabwean communities are interactive, Cohen added, “My husband and I established Shona, a school for mentally challenged children [who are] both Christian and Animist.”

In the 1990s, Cohen began her deep exploration of Judaism and her Sephardic heritage through food and art. Inspired by old synagogues from Sephardic communities in India, Israel, Morocco, Italy, Spain and Greece, the paintings of exotic talisman-wearing women invite the viewer into a lush other-worldly arena enhanced with symbolism, talismans and eye-popping color.

For a photo shoot for her cookbook, Cohen traveled to Rhodes with photographer Hoberman and members of her family. She prepared many traditional dishes and brought them with her, and then carried the delicacies on platters to the old fountain in what was the Jewish quarter, where her foremothers drew water. “It was almost like laying a tribute, a message that these handcrafted gastronomical skills would never be snuffed out, that they would live on in perpetuity, that something of the souls of those who had gone would live on,” she says.

Cohen describes the Sephardic community she grew up in as having a love of food matched by its love of life. She recalls sitting on the veranda of her family’s home in the evenings as a child. Their set table was expanded to accommodate the many friends and relatives who would stop by. They’d serve drinks and mezze, or small dishes and finger foods like savory pastries, fresh salads, spreads, nuts, olives and cheese. Some guests would tell stories or dance to the Turkish or Greek folk music, while strains of African drums might be heard in the background.  Here, she says, was “the mystique of Africa encompassing the Mediterranean joie de vie.”

As a child, she straddled these different worlds, and also attended, in sharp contrast, a strict British colonial-style school. Growing up, she learned to speak Ladino, in addition to French, Spanish, English, Italian and some Greek (her father also spoke Turkish and Hebrew, and her mother also spoke Flemish). Every year, her family would travel to Rhodes. At home, she wasn’t called Stella, but rather a series of Ladino endearments. She remembers that adults prefaced much of what they said with “in the name of God” in Ladino, which made her come to feel the “the presence of God in everything we do.” 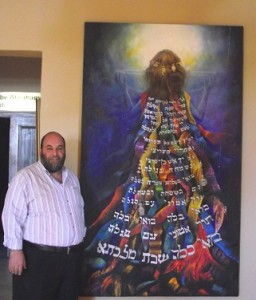 “The Travelling Rabbi" Silberhaft beside “Sabbath Bride,” a painting by Stella Cohen (Photo courtesy of the African Jewish Congress)

Now honorary Life Chairlady of the Sephardic Hebrew Congregation of Zimbabwe, Cohen worked with the American Jewish Joint Distribution Committee to establish Zimbabwe’s first eye clinic. The clinic’s wonderful work resulted in opening the door for Israel to establish an embassy in Harare.

She spent ten years writing Stella’s Sephardic Table after publishing a spiral-bound community cookbook as a fundraiser in Zimbabwe, and that book had unexpected international popularity. Here, she also includes sections on blessings, home remedies, folk beliefs and lifecycle events, like the bridal shower with its special rituals. Cohen’s paintings, which have been exhibited internationally, are featured in the book; they include the endpaper maps.

Now, many of the Jews with roots in Rhodes have moved again, leaving Zimbabwe for Israel, the United States, Europe and South Africa. Cohen’s son and daughter attended university in the United States and now live in New York with their children. While there were about 7,000 Jews there in the 1960s, the Jewish community of Zimbabwe now numbers about 150 people. There are still two Orthodox synagogues — one Ashkenazic, one Sephardic — although they have to pool their membership to get a minyan (the quorum of ten Jewish adults required for certain religious obligations). On Shabbat, the community alternates between the two shuls.

Outside her Harare home, Cohen has an extensive organic garden, where she grows lots of vegetables and herbs.

Jewish preacher: differences between Christianity and Judaism are in their packaging