Lack of resources force some Vapostori into open-air worship

For some Apostolic sects, it is part of their rituals to have the services outdoors, but for others it is lack of resources to set up church buildings in the city, a member of one of the sects told RelZim.org recently. 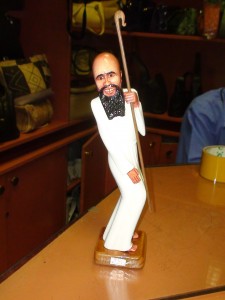 Mapostori statue on sale at the Harare airport.

In an interview in Bulawayo’s Ilanda suburb recently, Bishop Erasmus Sithole of Chitenderano ChaVapostoli said that lack of financial resources forced them to congregate in the bush. “As for us, it is not part of our rituals to gather in open air. We do not have money to rent a building, buy it or even build our own church.”

Bishop Sithole, who explained that they do not congregate when it is raining, added that they were still working on modalities to have their one-year old church registered.

Chitenderano ChaVapostoli-Ilanda was founded by Bishop Erasmus Sithole on September 5, 2010 and has a current membership of 60. The services at the church run from 10 am to 3 pm every Sunday, and congregants pray facing east as part of their rituals. “We usually begin our service by confessing our sins to one another and then have a Bible sharing. Our sermons are not given by one person. Instead, everyone in the church is given a chance to give a word of exhortation based on the Bible,” Bishop Sithole said.

There are a number of Apostolic sects in Zimbabwe with different rituals and different days of congregation. Some gather for their services on Saturday, while others congregate on Sunday.  Some of these sects include the Johane Masowe, Johane Marange, Twelve apostles and many others.

It is reported that some of Vapostori do not read the Bible at their services. Those who worship in the open air say they emulate Jesus, who, they say, never had a permanent residence. Some have even been congregating when the rains are out-pouring and at times when the sun is blazing.

Of late, the Bulawayo City Council wanted to effect a ban on open-air worship, citing lack of ablution facilities at the sites as posing a threat on the outbreak of cholera, which claimed many lives in 2008. However, this intent has been met with strong resistance with some Christians, saying the attempt by the local authority was tantamount to the violation of the freedom of worship, guaranteed in the Constitution of Zimbabwe.