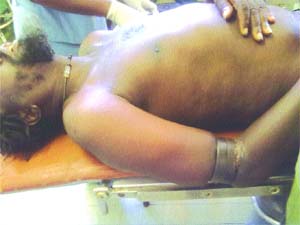 According to Newsdzezimbabwe a man who stays in the Thokwana village near Plumtree has had to undergo untold suffering after following the advice of a traditional healer.

The man, Mr Martin Mlalazi (54), was intructed to wear 2 wheel bearings on his arms by a local Traditional Healer. For a month the man wore the four metal pieces, but over time they got stuck on his arms as his limbs began to swell. After trying to remove them by himself, the man realized that it was impossible and he was referred to United Bulawayo Hospitals (UBH) for surgery.

According to hospital officials the man took too long to visit the hospital and the now bearings were now cutting deep into the flesh. Prior to coming to the hospital, the source said Mr Mlalazi, had desperately tried to remove the bearings by cutting them with a hacksaw and an axe but, however, failed to do so as they are made up of high speed steel, a very strong metal.

The incident, which was the first of its kind at UBH, left doctors in a dilemna so they called for engineering specialists from the Bulawayo City Council’s fire and ambulance services department. The engineers were successful in removing the bearings from Mr Mlazi’s arms but the man still remains in extreme pain.