Hundreds of fortune seekers from Maninji and surrounding villages in the Mangwe District of Matabeleland South Province continue to flood Prophet Masabayi Ncube’s home as they seek deliverance from different spiritual bondages. 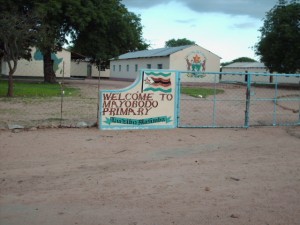 Prophet Ncube, who came from Tjankwa (Bulilima District) to Mangwe in 2002, is the founder of the apostolic Twelve Apostles Church, which has taken many villagers by the storm, through its captivating music.

Villagers who have benefited from the prophet’s services, which are free of charge, said Prophet Ncube can foresee impending dangers and calamities in an individual’s life regardless of whether the concerned person is a believer or not. The man of God then gives his clients prayed-for water to be mixed with bathing water to drive away all the evil spirits behind the imminent disasters in a person’s life. Those people who are said to be having bad luck also undergo a special cleansing ceremony at the Sanzukwi River Bridge, in Mbanjana village where only water is used.

During the religious rite, clients are told to bath while shouting at the bad luck spirits to leave them alone and never come back to influence their lives in whatever way.

The majority of the people who flock to the prophet’s home include women who have failed in their marriages, the barren, men who have failed to marry, those wanting to illegally cross to South Africa or Botswana for employment and many others.

During the festivities of last Christmas, the prophet was reportedly overwhelmed by the Botswana- and South Africa-based Zimbabweans who were returning to those countries. A number of rituals were performed for them so they do not get arrested for violating immigration laws of the neighbouring countries. Some were also given holy water that they had to cross the borders with.

Many who spoke to Religion in Zimbabwe said Prophet Ncube’s services have always protected them in the foreign lands as they have never been arrested and deported for illegally crossing borders without proper documentation. However, a few of those who spoke to me said that at times the prophet’s services do not help, as they have found themselves being deported for border jumping offences.

Synonymous with night vigil watches, known in Ndebele as imilindelo, Twelve Apostles Church members put on white garment with red ribbons as their uniform, and during each service visitors are encouraged to surrender their lives to God.