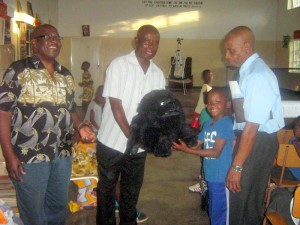 The donation was sourced from well-wishers in Australia after the children’s home property worth thousands of dollars was destroyed in an inferno in May last year. The fire which was suspected to have been caused by an electrical fault claimed one life, leaving the Home in a bad shape.

“In May 2012, we learnt about the fire which destroyed one of the homes and resulted in the loss of one life. We were so touched and we felt compelled to help in any way possible. We decided to make our shipment larger and began to collect donations of clothing, children’s toys, blankets and shoes”, said Simbarashe Mushete in a speech read on his behalf by his brother Taurai Mushete.

Mushete further added, “My wish for the young people of our generation is that we come together and work towards making a difference in our communities by all means possible especially those most vulnerable children who will always need our support.”

The Home has been facing a myriad of challenges ranging from lack of healthy food, absolute equipment to poor clothing for the children.

Mary Ward Children’s Home currently accommodates 75 children (43 boys and 32 girls) some of them are disabled and HIV positive.

Speaking during the donation ceremony, administrator Sister Mary Chironga expressed gratitude for the wonderful work. “I would like to thank our well-wishers who managed to stretch out their right hand to the needy with various items and at the right time of our greatest need. Our main aim is to provide a friendly atmosphere for the orphaned, abandoned or neglected and abused children regardless of their race and nationality,” she said.

The former Kwekwe executive mayor, Stanford Bonyongwa, assisted in the transportation of the goods from Harare to Kwekwe.

The Mary Ward Children’s Home was founded in 1993 by the late Sister Ottrudis and the children are placed in the home by the Department of Social Welfare.

Simbarashe Mushete currently resides in Sydney and works there with World Vision Australia.