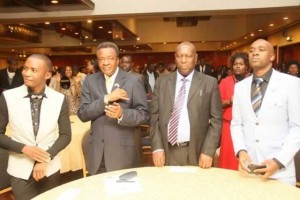 The colourful event was graced by various company representatives, musicians, pastors and politicians.

Pastor Charles and Olivia Charamba, Fungisai Zvakavapano-Mashavave and husband Courage, Jah Prayzah and Pah Chihera were some of the celebrities that graced the event.

First on stage was the group CCAP Choir that sang three songs and was followed by upcoming gospel-dendera musician Saiwe Chimbetu. She thrilled fans with song “Ndinopupura” a fusion of dendera and gospel.

Other artistes that performed were Sebastian Magacha who thrilled fans with the songs “Bhosvo” and “Satan Imbavha”.

The birthday boy later on performed some of his songs on the latest album including “Sahwira”, “Ziya Rangu”, “Pamazuva Angu” and “Favour”.

Most fans screamed out of surprise as Jah Prayzah and his three dancers joined Mhere on stage on the song “Sahwira” and they put up well choreographed dances.

Deputy Minister of Finance and Economic Development Samuel Undenge who was the guest of honour said artistes play an important role in building the nation.

“Musicians play an important role in the economic development of our nation. We are there to support them and they should be able to get instruments in an easy way. Music shows a person’s culture and Mhere did an awesome work,” he said.

Mhere to shoot DVD in SA