Zimbojamreports that there was chaos in Harare’s Josiah Tongogara Avenue yesterday afternoon, after the legendary tree on which the Zimbabwean spirit medium Mbuya Nehanda is said to have been 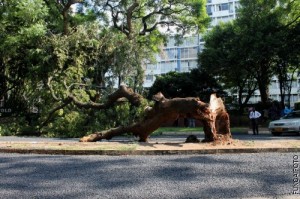 The Nehanda tree knocked down by a truck (photo. F. Tichawangana).

hanged, was knocked down by a truck.

A construction worker resurfacing of the road backed into the tree by mistake, resulting in its trunk snapping about 60cm from its base and toppling over.

Not realising the significance of the tree, one of the other workmen got a chain saw and started ripping away at the tree to clear the road so that traffic could flow. He had almost gone through the whole branch when someone frantically yelled that they had knocked down ‘Nehanda’s tree’.

They were advised to back off and call the National Parks & Wildlife Authority or the Ministry of Home Affairs as the tree was a ‘protected national monument’.

For hours, work stopped as the team of workmen stood there looking really worried. 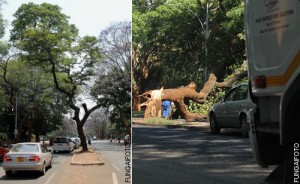 The Nehanda tree, pictured at the end of October 2011 (left) (photo F. Tichawangana).

The tree was conspicuous as it stood alone in the middle of the road, close to the intersection of Josiah Tongogara Avenue and Sam Nujoma (formerly Second) Street and was the cause of much curiosity over the years as people wondered why it had been spared when the roads were constructed.

In 1896 Rhodesian settlers hanged Mbuya Nehanda. The hanging is believed to have come after the imposition of a “hut tax” and other tax assessments in 1894, at which both the Ndebele and Shona people revolted in June 1896, in what became known as the First Chimurenga or Second Matabele War. The Mashonaland part of the rebellion was encouraged by traditional religious leaders, Nehanda being chief among them. Along with her spiritual husband Sekuru Kaguvi, Nehanda was charged with murder (Kaguvi for the death of an African policeman and Nehanda for the death of the Native Commissioner) and sentenced to death by hanging. 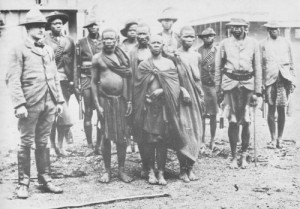 Two unsuccessful attempts were made to hang Nehanda. An African prisoner who was present at her hanging suggested that the hangman remove the tobacco pouch from her belt in order for her to die.

Nehanda’s dying words are said to have been, “My bones will rise again.” 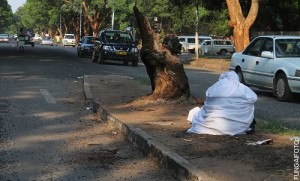 This morning, a woman dressed in white robes could be seen praying at the stump of the Nehanda tree (photo. Zimbojam).

Just a few weeks ago a conversation sprouted on social media platforms with people asking if it was true that it was not allowed to take photos of the Nehanda tree.

This morning, as motorists drove to work they could notice a woman dressed mostly in white sitting close to the stump in a position that suggests she was praying.