The gig by Harare-based gospel diva Mercy Mutsvene not only enlivened the city of Kwekwe in Central Zimbabwe. It also proved to her legion of fans that she is still one of the top female gospel artists in Zimbabwe.

Since it was her first time to hold a show in Mbizo stadium in Kwekwe, the gospel diva did put away the conception people have about her music through a highly charged performance. 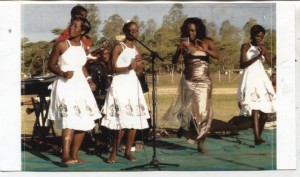 To prove her prowess, she delivered a three-hour non-stop performance with a series of her original compositions: ‘Kutenda Netariro,’ ‘Jerusalem,’ ‘Zano,’ ‘Tanyaradzwa,’ ‘Jesu Unoda,’ ‘Hatina Musha’ among other songs. Mutsvene opened her act with a song called ‘Makomborero.’

The spectacle lived up to its billing, as the crowd left the function with nothing but smiles on their faces.
In an interview with Relzim.org, fan Lorraine Chatira said that the singer is still one of the best female gospel artists in Zimbabwe. “Even her performance on stage shows that she is a talented gospel musician who has the ability to nurture other young upcoming gospel musicians,” said Chatira.