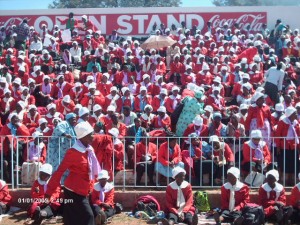 The delegates to the week-long commemorations were drawn from all the ten provinces of Zimbabwe. Some came from Zambia, Namibia, Botswana and South Africa to join their counterparts in the historic event. The commemorations kicked-off on August 18 and the curtain came down last Sunday August 21. The Church’s leader, Bishop Amos Ndhlumbi said the celebrations will afford the Church time to intercede for the country’s political and economic situation to improve.

For some of the Church members, who were too young to take part in the centenary celebrations in 1991, this year’s commemorations afforded them a chance to be part of the Methodist Church’s history.

Addressing congregants, who flooded the ZITF stadium, one of the Church’s leaders Reverend Dr. Solomon Zwana (who also serves as the General Secretary of the Zimbabwe Council of Churches) said they were celebrating 120 years of a successful walk with God during which they manage to spread the Gospel and establish a number of institutions that benefit the majority.

Members of the Church who spoke to RelZim.org expressed happiness at the holding of the landmark celebrations in Bulawayo. “I am happy that commemorations of such a magnitude are being held here in Bulawayo. It shows that there is decentralization of activities. I am also excited that as Church we have really grown and we continue to grow,” said Neliswa Mxoli. Samuel Mapuranga had this to say: “This is once-in-a-lifetime experience and opportunity. I am delighted. The grace of the Lord has been advanced to us as the youth. I feel much blessed.”

The Methodist Church boasts Waddilove, Sandringham , Msengezi , Methodist Vocational Training Centre in Bulawayo, Thekwane High School in Bulilima among others and a number of children homes across the country.

The Methodist Church was founded in 1738 in Scotland, when followers of John Wesley came together to find a faith after his teachings.