reprinted from New Zimbabwe, with additions 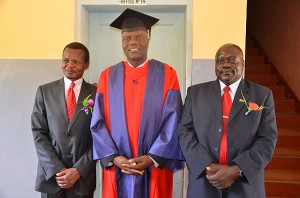 Just months after spearheading an ambitious project to raise USD 20 million for the University of Zimbabwe, Deputy Prime Minister Arthur Mutambara has outlined a rescue plan for his old school – Hartzell High School in Mutare – which he says has “fallen on hard times.”

Mutambara was guest of honour at the Methodist Church-run school’s speech and prize giving ceremony recently where he was greeted by collapsing infrastructure and declining standards.

Hartzell, Mutambara said, was a “school of excellence that has contributed to the academic revolution in our country and produced a distinguished group of prominent and successful personalities occupying influential roles around the world.”

But the school “has fallen on hard times and requires strategic intervention.”

“We are reaching out to all individuals whose lives were in any way affected by Old Mutare Mission [Hartzell’s old name] to step up to the plate,” invoked Mutambara.

One of several initiatives to raise USD 2 million for the school was a dinner held by the Deputy Prime Minister in late October.

Zimbabwe Newspapers Group (Zimpapers) CEO Justin Mutasa, a former pupil and teacher at the school, is working with Mutambara in the fundraising initiative. He said priority areas requiring urgent funding include the refurbishment of laboratories, upgrading of the sewerage system and sprucing up other infrastructure. “There is a glaring difference from the institution which we used to be proud of during our stay both as pupils and teachers at the school. Our Jerusalem has literary died and we cannot allow that to happen,” Mutasa said.

“The school needs funds and they will only come from us, those who have their roots at the school. I know we have the who-is-who in the corporate world who passed through the school and they will not take it lightly to see their school suffering from years of neglect.”

Mutambara arrived at Hartzell as a Grade 5 pupil in 1979 and completed Upper Sixth in 1986. He skipped Grade 6.

The school is named after Methodist Bishop Joseph C. Hartzell (1842-1929) who obtained the buildings at Old Umtali (name of Mutare in the colonial times) from Cecil Rhodes and the British South Africa Company for use as a mission station.

If you want to deposit cash into the school account you can do so using the following details: Hartzell High School, ZB Bank Mutare, Account 4532392675200 and send your notice of deposit