December 12, 2016 , published in News , Reprinted from The Standard 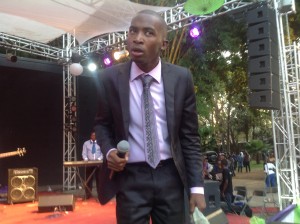 Gospel musicians Mathias Mhere and Pax Gomo will headline the Goodness and Mercy Ministries’ Spiritual Spectacles Night of Remembrance to be held in Glen View 8 on December 31.

Goodness and Mercy Ministries founder “Prophet” Tapiwa Freddy, who has hogged the limelight with the “spiritual spectacles”, said all was set for the “big night” which he described as “an opportunity for congregants to cross over into next year knowing their future.”

Freddy, who is also a musician, said he would also join Gomo on stage.

“I did a collaboration with Gomo and we are going to perform together on the night,” he said.

The Musana-born man of the cloth said the Spiritual Spectacles Night of Remembrance would enable congregants to “prophesy” their future in 2017.

“At 12 midnight, I will declare the ‘spiritual spectacles’ and congregants will foresee the future. It will enable them to see the future and make personal decisions,” he said.

Freddy, whose miracle services have been attracting unprecedented crowds since the introduction of the “spiritual spectacles”, said he was expecting a huge turnout on the night.

“We are expecting congregants from all over the globe and they will be accommodated in our guest houses,” said Freddy.

Although Freddy has been accused of drawing his power from African occultism, he maintains that it was God at work.
“Many people live in the dark and the Spiritual Spectacles Night of Remembrance will showcase God’s power. I believe God wants people to know what their future holds,” he said.

Of late, Freddy has been receiving enquiries from people as far afield as Masvingo, Chinhoyi, Gweru, Bulawayo and Kwekwe. He said his “good work” had even spread to countries like South Africa, Botswana and Zambia, among other regional countries.

“Our testimonies have also proved our worth,” he said.

He claimed that some of his prophecies had enabled people to recover some of their stolen goods.

“I can refer you to 2 Kings 6 verse 17. The passage says Elisha prayed, ‘Open his eyes, Lord, so that he may see. Then the Lord opened the servant’s eyes, and he looked and saw the hills full of horses and chariots of fire all around Elisha’,” he said.

The prophet, whose spiritual specs caused mayhem when some women “in spirit” claimed to have seen their husbands cheating on them, said the “spiritual spectacles” were of benefit to families.

“There is what is called permissive will. God can simply let something happen in your life, good or bad. That is, He does not directly intervene to prevent it from happening, but you can pray to Him for a permissive will,” he said.

He said the church’s sermons were recorded and available on CDs, DVDs and on the church’s Facebook page and website.