Minister of Information: Church and politics are closely linked

Webster Shamu, Minister of Media, Information and Publicity, recently stated that Church and politics while commending a Vapostori sect for their unwavering support of the anti-sanctions campaign. He was addressing the members of the Johane Masowe we Chishanu Apostolic Church at Jurani–Firi Santa in Chitungwiza. 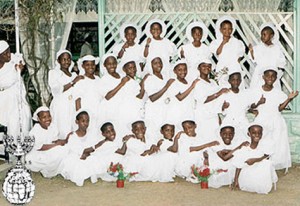 On the initiative by the church to engage in various self sustaining projects, which include garment making, poultry and banking, Cde Shamu said such vision is in line with the ongoing indigenisation and economic empowerment drive.

Hundreds of worshipers including  Attorney General Johannes Tomana and some politicians gathered at Jurani-Firi Santa Shrine to celebrate the life of the church’s founding leader, Madzibaba Godfrey Nzira.

According to ZBC, Church leader, Madzibaba Godfrey Nzira reiterated calls for the removal of illegal sanctions saying they are affecting ordinary Zimbabweans. The National Anti Sanctions Petition Campaign was launched on the 2nd of March by  President Mugabe.