Reprinted from MyZimbabwe, with minor additions 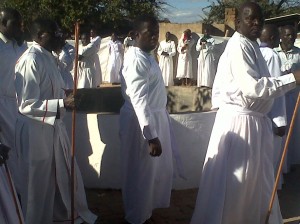 “There is a serious revolt of voters’ yekuti hatichadi Zanu PF. Yafa yakaloader. Anoti akabata apa pari kupisa Zvino ave kumapositori. Ukawona muRoman Catholic apfeka gown remapositori zvaoma (There is a serious revolt of voters they no longer want Zanu PF. Everywhere is now hot he is now at the apostolic. When you see a Roman Catholic wearing a gown of the apostolic things are tough,” he said.

Tsvangirai told thousands of party supporters in Gokwe that the next MDC plan was to end high levels of poverty and lack of infrastructure development that are affecting the people of Zimbabwe mostly in the rural areas. He held rallies at Nembudziya, Gumunyu, Chireya and Chitekete business centres in Gokwe in the Midlands province.

“The next MDC government will endeavor to ensure that the high levels of poverty in Zimbabwe are in thing of the past especially in the rural areas where the majority of the people stay,” said Tsvangirai.

He pledged that the MDC was committed to rural transformation and in its 2013 elections manifesto outlines the party’s comprehensive plan for transforming rural communities.

Tsvangirai bemoaned the neglect that rural communities have been subjected to since Zimbabwe attained independence 33 years ago. He said the vision of the MDC is a modern, healthy and functional democratic developmental state that takes pride at leaving no one behind, particularly people in the rural areas.

“Our agricultural policy emphasises on food security and we will invest heavily in irrigation development to support crop production in dry regions of the country.”

Known for its high production of the cotton crop, Tsvangirai said there was need to put in place mechanisms in Gokwe that ensure that the area adopts viable economic agriculture.

He said it was important for the next MDC government to ensure that all children learning at public primary schools received free education while women had access to free maternity, a move which will ensure that the women are able to monitor early signs of cancer and other curable diseases.

The MDC promises to expand the health and education facilities to ensure that learners in rural areas use modern learning facilities and that the citizens have access to specialist healthcare without having to go to urban centres.