Mugabe will not resign if elected; for Tsvangirai the vote is emotional 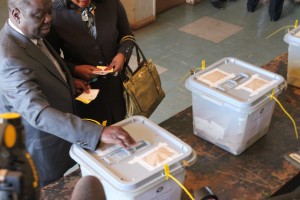 Zanu PF presidential candidate Robert Mugabe Wednesday said that, if elected into power, he will serve the full term at the same time thanking Zimbabweans for voting in peacefully.

Mugabe, who cast his ballot at Mhofu primary school in Highfield Harare, said he would not resign after elected into power. Mugabe said he will not cheat the people into resigning.

“Why not don’t you want me to serve the whole term what I am elected for? Why should I offer myself as a candidate if it is to cheat the people into resigning after?” Mugabe said.

There has been speculation that Mugabe once elected into power will resign and appoint either his Vice Joice Mujuru or Defence Minister Emerson Mnangagwa.

Asked to comment about the vote-rigging claims by the opposition Mugabe replied: “Politicking — they want to find a way out.”

But after casting his ballot at Mt Pleasant High School in Harare, the MDC-T presidential candidate insisted that the issue of the voters’ roll has not been resolved.

“The voters’ roll has not been resolved. We hope that it is not going to be a big impediment for people to make a choice. Everyone would be allowed to vote; the law says that anyone who would be at the queue by seven o’clock will be allowed to vote,” Tsvangirai told reporters.

Mugabe said people will vote freely and fairly as there is no pressure being exerted on anyone.

The Zanu PF octogenarian leader said once voted into power he will work on economic stabilization.

“In our new term we have lots of things to do really to try and get our economy back on its fit. It means we are looking at our industries as good as collapsed then doing much work in regard to the mining sector thus sector which we think can prop up all the others,” Mugabe said.

Mugabe said he will stick to his guns on the Indigenisation policy: “Indigenisation we cannot escape that because that’s the reality of the situation. We are Zimbabweans. We are a sovereign country. Rhe resources of the country are ours so really to say Indigenisation, to say that term, is to explain to our people what we are doing.”

Tsvangirai said he hope that the people of Zimbabwe complete the change that they have been fighting for, for more than a decade.

“We wish everyone time to complete the change that we have always fought for the last 14 years. It’s an emotional moment sometimes when you see all these people after all the conflict, the stalemate, the suspicion, the hostility. I think there is a sense of calmness that finally Zimbabweans will be able to move on again,” Tsvangirai said.

Mugabe admitted that the journey to elections to end the coalition government in Zimbabwe has been a long journey he however said “it was a good experience”.

“It was naturally harder you know a very torturous route to get to this (election) – new constitution and so forth. When you are in government with other parties you have to get the views of everybody to agree in cabinet and so on. We hope the people will decide now which way they would want us to go,” Mugabe.