President Robert Mugabe arrived in Italy recently for the inauguration of Catholic Pope Francis I. 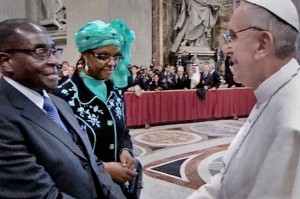 The Vatican spokesman, the Rev. Federico Lombardi, said the Vatican does not issue invitations. “Those who wish to come, can,” he said. “No one is refused. No one is invited. We welcome those who want to come.”

Mugabe, who was accompanied by his wife Grace and son Chatunga, chatted briefly with the Pope after standing in a long line of world leaders queuing to greet the Pontiff.

In his homily, the Pope exhorted leaders to be at the service of their people. 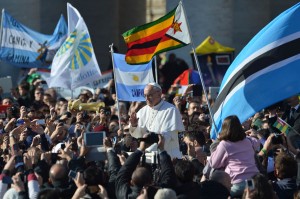 Pope Francis I during his inauguration mass at St Peter’s square on March 19, 2013 at the Vatican. (Photo: Vincenzo Pinto/AFP)

Robert Mugabe is reported to have invited Pope Francis to visit Africa because he is “a man of God who will be praying for all of us, praying for the sinful world to repent”.