Mugabe threatens Mawarire and foreign embassies, says has means to deal with ‘our enemies’ 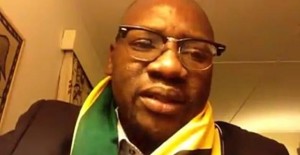 The under siege leader was addressing thousands of Zanu PF supporters who thronged the party headquarters on Wednesday afternoon to show solidarity with him following demands by war veterans for him to step down.

In his address, President Mugabe warned leaders of local Pentecostal churches against interfering in politics.

He then directed his threats at the now exiled pastor Mawarire whom he said was courting real trouble.

“I am warning Mawarire and others, I want to warn them very strongly; Zanu will not tolerate any nonsense, any nonsense that is done in the name of religion,” President Mugabe said. “So keep to your religious side and we will respect you.

“We know how to deal with our enemies who have been trying all along to bring about regime change in the country; we have the means to defend and protect our hard won freedom. That is crucial to us.

“We have brought unity, unity to the country and the people are united; please, don’t disunite our people.”

Pastor Mawarire has unsettled the Zanu PF led government with his social media campaigns denouncing the current government for failing to deal with high level corruption, joblessness and police brutality, among other accusations.

He is credited with the successful job stay­away that rocked the country early this month in protest over government’s continued failure to deal with the national catastrophe.

Mawarire was arrested and later charged with attempts to subvert the state sometime this month but the charges did not stick after a Harare court ruled that he had not been properly indicted.

Even after the court case, Mawarire continued to receive threats from unknown assailants, prompting his fleeing the country last week to seek refuge in South Africa with his family.

Mugabe was to publicly tell Mawarire from the national Heroes Acre that he “should leave” Zimbabwe if he was unhappy.

Mugabe said Mawarire was “not part of us”. The state has persistently accused foreign embassies, top among them the French, for allegedly sponsoring the current uprising against the Zanu PF regime.

In his address, President Mugabe took a swipe at embassies he did not mention for allegedly harbouring a plot to oust his government.

“…Foreign embassies in the country that are interfering with our politics intervening although they are doing it privately, clandestinely, I want to warn them to desist from it.,” he said.

“The rules that govern them do not allow them to interfere with our politics, to try to subvert our system of government and to do things that amount to subverting the present government and its authority. Please, stop it!”