The late Pope John Paul II was beatified yesterday in St. Peter’s Square before a crowd of one million Catholics and world leaders which included President Mugabe.

The Herald reports that President Mugabe was accompanied at the ceremony by First Lady Amai Grace Mugabe and their sons Chatunga and Robert Junior. 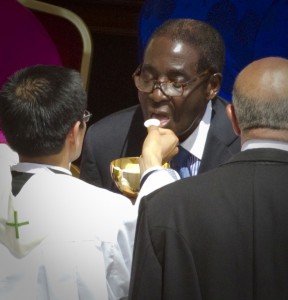 This visit has stirred some controversy due to the dire state of  Zimbabwe, as well as the ban on EU travels for the President. Mugabe, 87,  has been widely condemned for human rights abuses.

“Mugabe is going to the Vatican, not Italy, so he can take part in the ceremony thanks to the exemptions included in European Union rules,” an Italian foreign ministry official told AFP.

A Catholic, Mugabe also attended John Paul II’s funeral in 2005 despite the 2002 travel ban — a visit that drew controversy because Britain’s Prince Charles shook hands with him.

Zimbabwean Finance Minister Tendai Biti recently complained that Mugabe’s lavish foreign trips are expected to cost the country $50 million this year,  contributing to a projected deficit of some $150 million

Mugabe may be welcomed in Rome, but back in Zimbabwe he is feuding with the Catholic bishops, according to The Zimbabwean.