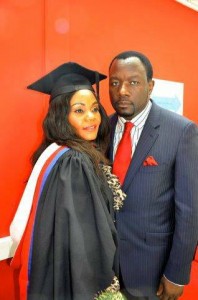 Gospel diva Ivy Kombo who recently graduated with a law degree from University of Bedfordshire said her new qualification would not affect her passion for music.

Speaking from her base in the United Kingdom, the Nguva Yakwana hitmaker said music was her number one passion and she would soon be releasing a new album.

“Music is my number one hobby and I will not quit. I know I have been quiet for a long time, but that is how it is in life,” said Kombo.

“I passed [the degree] with a 2.1 class and I will certainly practise law but my music comes first. I am so happy as this is the fulfillment of the scripture which says ‘seek ye the Kingdom of God first and all things will be added unto you’.

“After serving the Lord from a teen age, preaching in the rural areas and going without food for the gospel, praying in the mountains, sacrificing school time and giving to the needy, I have seen all the achievements being a fulfillment of scripture. This is my own story and no one can take it from me,” said Kombo.

Kombo is one of Zimbabwe’s most successful female singers. The gospel star, propelled to national stardom by hits such as Nguva Yakwana and Handidzokere Shure, has had a fairly tumultuous private life.

She is now based in Luton, England with her husband, Bishop Admire Kasi and is now referred to as Prophetess Kombo-Kasi.

The better part of her music career was marred by controversy when she was rumoured to be having an extra-marital affair with Kasi.

The rumour proved true when she married Kasi just after parting ways with her husband Admire Moyo. Kasi’s marriage also broke down due to the relationship and the lovebirds relocated to the United Kingdom where they head Upperview Ministries International church.