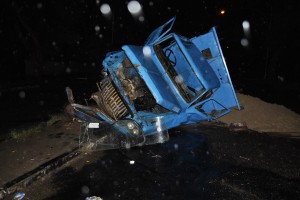 At approximately 02:30 am on the morning of December 18, I was driving home from a party in the Harare suburb of Borrowdale when I noticed that a lorry had crashed into the Nehanda heritage tree. Despite the size of the tree stump it had caused extensive damage to the vehicle.

As I drove past the scene of the accident, I saw a car pulled over and its driver and passengers seemed to be checking if anyone was injured. It seemed like no one was hurt, but after driving for a few meters, my instincts told me to go back so I made a u-turn.

When I arrived at the scene of the accident the car I saw before was driving off, an indicator to me that no one had sustained any serious injuries. I pulled over and spoke to one of the five or six men who were passengers in the truck. The young man I spoke to reassured me that everyone was fine and that they didn’t need an ambulance. When I attempted to ask them what had happened, he failed to articulate the details of the accident and it was quite evident to me that he and his colleagues were in shock. I decided to rush home and get my camera but by the time I returned the truck had been abandoned and none of the truck’s passengers were to be found.

After looking at the pictures of the crash it became obvious that this was not a normal accident. The extent of the damage to the truck is clearly inconsistent with the size of the tree stump that it hit. For a massive vehicle of that nature to bump into a small tree stump and end up a wreck does not make sense. The impact from the crash could not have been so much as to topple a heavy vehicle carrying tons of river sand and make it land on its side. The truck’s wheels were extensively mangled, making it impossible to believe that this could have been done by a tree stump that only stands less than a meter high. Even more shocking is the fact that none of the truck’s passengers were injured enough to need an ambulance and as far as I could see all of the men were up on their feet and unhurt.

In the risk of sounding too superstitious, I can’t help it but feel that Mbuya Nehanda’s spirit is saying something to the nation. I won’t go too much into the spiritual connotations of this accident because topics like this are subject to opinion, but some might say this was a sign from Mbuya Nehanda indicating the prophesy she made about her bones rising has come to fruition again. Despite whatever opinion one might hold, these pictures say a thousand words. The legacy of Mbuya Nehanda cannot be ignored any longer and the more we try to trivialise or demonise the memory of this brave woman, the more we as a people lose the essence of what she stood for.

Despite varying opinions on Mbuya Nehanda (most of which are totally misguided), this revolutionary leader and spirit medium started the First Chimurenga, along with Chief Mashayamombe, Mambo Hwata and Sekuru Kaguvi. In 1988 Mbuya Nehanda was hung to death on this legendary tree together with Sekuru Kaguvi, after she ordered the execution of British Commissioner Henry Hawkins Pollard in 1887. Pollard was Rhodesia’s first colonial master who came as a result of the 1884 -1885 Berlin Conference, in which Africa was carved up by 14 European representatives.

Mbuya Nehanda fought so that you and I can be free today. She died for every Zimbabwean, regardless of your religious beliefs, political affiliation, philosophy or background. If we do not honour her memory and what she stood for, then it says a lot about our collective ignorance. When Europeans honour their saints (who are actually their ancestors) and when they put the faces of their leaders on their currencies, we as Africans find it acceptable and even admirable. When they build shrines to commemorate where their ancestors rest, we flock and visit them as pilgrims! But when we as Africans acknowledge our ancestors and honour those who came before us it is called ‘demonic’.

Mbuya Nehanda is symbol of resilience and determination of not only Zimbabwean women, but of all African women who have always been at the center of our people’s struggle for freedom. I am amongst hundreds of thousands of children who were born at Mbuya Nehanda Maternity Home, but who don’t really know who she was or what she represents. I have also been a resident of the Avenues area for several years, but it took the falling of the Nehanda heritage tree for me and others to learn that this Musasa tree was the one from which Mbuya Nehanda was hung.

Ancestral worship was one of the things that was attached to Mbuya Nehanda as I was growing up and as a Christian I never bothered to pay her much attention. Now I am almost 30 years old with 2 daughters of my own and I realize that there is not enough information about the role Mbuya Nehanda and women like her played in the struggle for our freedom. The same imbalance in the documentation of the African Story can also be seen in South Africa, where for years Winnie Mandela has been sidelined and demonized yet she was one of the architects of that country’s freedom. For those who have no desire to learn about Our-Story instead of His-Story, this kind of information does not really matter. But for those of us who want this and future generations to learn more about Africa’s story, Mbuya Nehanda’s role in Our-Story has to be highlighted.

Using Mbuya Nehanda and Winnie Mandela as references I have found that the trivialization of these women’s roles has watered down the role of women in His-Story. As the Founding Mother of this nation, I feel that we could do a whole lot more to honour the memory of Mbuya Nehanda. I would love to take my daughters to a place where I can show them the larger-than-life statue of this legendary woman and explain to them that women are not cowards but leaders. It was with great disappointment many years ago that I found David Livingstone’s statue standing tall and proud at Victoria Falls, yet he was responsible for the oppression and deaths of countless numbers of Africans. I feel that it would be more a fitting to see the likeness of a true lioness like Mbuya Nehanda at a symbolic place like Mosi-a-tunya. The mothers of this continent sacrifice themselves generation after generation yet we pay them no homage.

The issue surrounding the Mbuya Nehanda tree is not it’s cutting, but in the erasing of the story that it symbolises. If nothing is done to preserve that tree and where it stood, that part of Our-Story will be lost forever and we will continue to teach our children His-Story. If that happens, we will always be like a people who are coming from nowhere, going nowhere & achieving nothing!

Across our country there are landmarks which denote His-Story. Schools, statues, parks, obelisks, buildings and roads are named after the same people who kept our fore-fathers in shackles. From David Livingstone Primary in Harare to Godfrey Huggins Primary Schools in Marondera (named after a Rhodesian prime minister) we teach our children to respect their ancestor’s oppressors. From Africa Unity Square (designed in the shape of a union jack) to Cecil John Rhodes tomb at Matopos (a very spiritual place for our people) His-Story is being told, not ours. That tree on Josiah Tongogara was more than a tree, it is a symbol of Our-Story. It is also a heritage sight and tourist attraction that should be protected and kept for future generations to cherish.