Maria Vesper of South Ridge Community Church helps at a feeding station that feeds 200 kids a day in Rugare, Zimbabwe. Her church is making a long-term commitment to the people of this village (photo by NJ.com).

The South Ridge Community Church of Franklin Township in the American state of New Jersey is sending a five-person delegation to Zimbabwe toward the end of August.

Rugare, a village in rural Zimbabwe, has lost a generation to HIV/AIDS, according to Steve Sargent, director of South Ridge’s “Extend Ministries,” so-called because members work to “extend God’s grace.” The population consists of grandparents and children, and South Ridge wants to help them by partnering with a Rugare church headed by Pastor Henry Zihove.

South Ridge is purchasing a 15-bed orphans’ home there, which will be owned and operated by a nonprofit called Hands of Hope in collaboration with Pastor Zihove’s church. An addition is expected to double the capacity of the orphanage. South Ridge is also getting behind “micro-financing projects” whose goal is empowerment and self-sufficiency, said Sargent. That effort could, for example, help people buy goats or chickens or learn to make peanut butter or do hair styling. 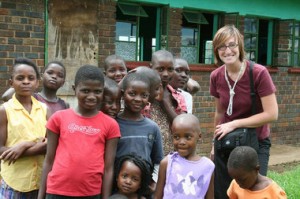 The children's smiles belie the pain caused by HIV/AIDS in Rugare, Zimbabwe, which has killed their parents' generation. There to help is Rose Stapley of South Ridge Community Church of Franklin Township. This photo is from her January visit. She's going back in August (photo by NJ.com).

Because all these undertakings are “relationally driven” in the local culture, it is vital for the Americans to spend time with the Africans and develop rapport, Sargent explains. Besides Sargent, the delegation will consist of Senior Pastor Nathan Tuckey; Ben Stapley, who will shoot a documentary to help with fundraising; Rose Stapley, who is South Ridge worship leader; and Maria Vesper, a member of South Ridge’s global ministries team. In August this team will “officially launch” South Ridge’s partnership with Zihove’s church.

Then, early in 2012 South Ridge will begin sending teams to Rugare to work on specific projects.