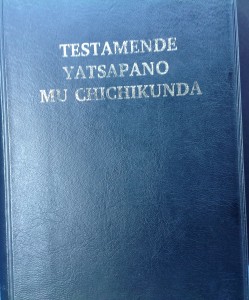 The group led by Robert Chimbiti, the coordinator of Mvurwi community fellowship, has already translated the New Testament which is now being used by the Chikunda people.

In an interview with RelZim, Chimbiti said the translation has got a great impact both in spiritual and the circular world.

“When one read the bible in his/her own mother language he/she understands it much better  it’s like God speaking to you in your mother language,” Chimbiti said.

The Chikunda people are a tribe that lives along the Zambezi River in Zimbabwe and they are also found in Zambia and Mozambique.

Chimbiti said they want to develop the Chikunda language so that “people can read it and learn it.”

He added: “Our children are learning in Shona yet they grew up speaking Chikunda. When they go to school they are learning out of translation but when we write in Chikunda they learn straight from their mother language making life much easier for them.”

Chimbiti said they were able to do the translation through the support of the Word for the World Bible Translator-s an organisation that was formed in South Africa and currently present in a number of African countries Zimbabwe included.

“My message out there is we really need more support from the Chikunda speaking people. We appreciate comments on the materials that we are producing,” Chimbiti said.

“If you document the language it means you are preserving the records on the language. We are saying the language is something that we shouldn’t lose because it’s our identity,” Dr Mangoya said.

English and Shona dominate as ‘Medium of Instruction’ in the official domains, an indication that minority languages are still being neglected in most schools of Zimbabwe.

Half-hearted efforts were made to teach the “minority” languages in primary schools up to Grade seven. It, however, does not appear that the programme will be pursued beyond Grade Seven.

Pupils who would have one of these languages at primary school level would have to start doing Shona or Ndebele at secondary school.

Impediments to the introduction of the teaching of minority languages include lack of teaching materials and competent manpower to handle the subjects at secondary school level.

There are no less than 10 local languages usually referred to as “minority” languages.

With the exception of one African language Tswawu, which is Khoisan spoken in the remote parts of Bulilima District, the rest are Bantu languages-Kalanga, Tonga, Sotho (Birwa), Venda, Nyanja/Chewa, Shangani, Hwesa, Nambya, Chikunda, Barwe, Sena and Xhosa.

The government of Zimbabwe has promoted a language policy that has promoted English as the official language of the state. Shona and Ndebele, the two dominant endoglossic languages have been accorded the status of national languages.

Large populations speak some of the so-called minority languages across the borders.

Sadly, very little co-operation has taken place among neighboring countries to enhance the status of the same languages in Zimbabwe where they are marginalized.

One Response to New Testament bible for Chikunda community