“Disregard for sacred places such as the Njelele Shrine by some Zimbabweans shows how far Africans have gone astray in pursuit of foreign religions,” bemoans Gogo MaDube, a staunch traditionalist. 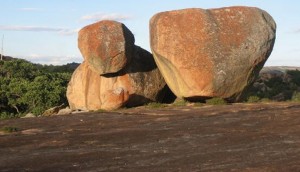 The elderly woman, who runs Kwamatebele Herbal Life Traditional Hospital, nestled between 13th and 14th Avenues along Lobengula Street in Bulawayo, yesterday expressed her disappointment to Relzim.org over Africans who are now shunning the traditional religion.

“These days people no longer regard the Njelele Shrine with the sacredness it carries and that is quite disturbing to us traditionalists,” she said. “Our African world has been turned upside down in broad daylight. It is only traditional healers and a handful of people who still preserve our own African tradition, but the rest has since forgotten where we come from as Black people.”

The staunch traditionalist further explained the significance of the Njelele Shrine in the ancient days: “It was the place where elders used to go and report all problems bedeviling communities such as droughts, lightning bolts striking people. They also went there to apologise for society’s misdemeanors and other related issues. There used to be a voice coming out of the Njelele rock wherever spirit mediums and iwosana ( persons with  rainmaking spirits) would go to present their reports to the shrine. However, that voice has since been mum and that could have been caused by the way the sacred place is treated these days,” she lamented.

“Angikwazi ukuthi yindaba abantu abamnyama bephambana lelanga litshona (I don’t know why Black people have chosen to do the opposite of what they are supposed to do)? We have Indians in our midst but they haven’t rejected their culture, beliefs and customs like what our children have done,” added the clearly concerned MaDube.

She said the younger generation needs to be educated on African traditional beliefs saying some of the misfortunes the country is experiencing are a result of the people’s rejection of their traditional African roots.

“Our children need to be taught on the importance of our traditional religion as Africans and Black people and I am personally doing the best I can for this to take place. I have written about four manuscripts of books on African religion and I am looking forward to have at least one of them published this year. I believe they will go a long way in availing our religion to our lost children,” she said.

Gogo MaDube added that yester years it was unheard of for a pregnant woman to be struck by a bolt of lighting or for the same to be killed in a car accident because people observed African religion.

The shrine located in the Matobo Hills of Matabeleland South province is usually visited between August and September annually when rainmakers from all over the country come together for the ritual purposes just before the rainy season.