Members of the Orthodox Church in Bulawayo, who last congregated during Easter holidays, will converge this Saturday to celebrate the liturgy (Holy Mass) in St. John the Forerunner church, situated at the intersection of Samuel Parirenyatwa Street and 12th Avenue.

Speaking to Relzim.org at the church’s premises , a caretaker and parishioner (who did not want to be identified by name) explained that they have not been having liturgies every week since the beginning of the year 2011, following the departure of their priest last year. 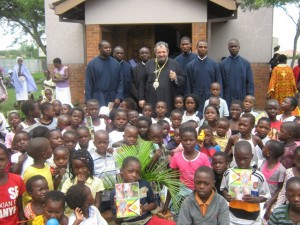 The Orthodox believers of Zimbabwe.

The Saturday liturgy, slated for 9 am, like the Easter one, will be celebrated by a priest from Harare and will be exclusively in Greek, the caretaker, who is conversant in this European language, said.

The caretaker, who was busy cleaning up the premises in preparation for the Saturday solemn gathering, showed Relzim.org the Greek books used during the liturgy and explained how his Church worships God. He also said that three months after admission into the Orthodox Church one qualifies for baptism and receiving the Holy Communion. Baptized Catholics can simply be admitted into the Church upon producing their baptism certificates. 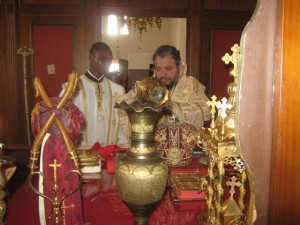 Ordination of an indigenous priest Fr. Nektarios by His Eminence Archbishop Serafim.

However, some of the differences between the Catholic and Orthodox churches are there. Catholic parishioners can mingle during Mass, whereas,  during the liturgy, the Orthodox women sit at one side of the church while men at the other, elaborated the parishioner.

My Orthodox interlocutor said that after the Saturday liturgy it is still not clear when they would have another holy gathering until December. However, by December, they hope to have a permanent priest in Bulawayo.

The Orthodox Church also has a parish at the Mzilikazi high density suburb of Bulawayo which meets the spiritual needs of the indigenous Christians, with all its services conducted in Ndebele and Shona.

The parishioner at the downtown church also emphasized that indigenous Zimbabweans interested in becoming part of the Orthodox Church should go to the Mzilikazi parish as they may not identify with his parish that exclusively uses Greek and to a limited extent English.

As of 2000 the Orthodox Church in Zimbabwe had about 2000 members. Orthodox activities in Zimbabwe are conducted under the auspices of the ruling archbishop, His Eminence Serafim. The area of the Archbishop’s jurisdiction also includes the countries of Angola, Malawi, and Botswana. The Archbishopric counts 18 churches, 7 mission centers, 5 mission clinics, 1 technical school, 2 nursery schools, several Sunday schools and 2 orphanages — most of which are in Zimbabwe.