Parirenyatwa under fire for condom utterances 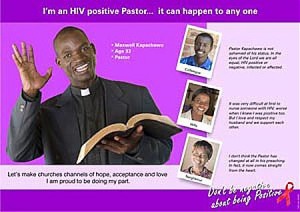 HEALTH and Child Care minister David Parirenyatwa has come under a barrage of attacks from Christians for his suggestions that condoms should be put in bibles for church members to use.

Parirenyatwa said it was unfortunate that some church leaders could not resist engaging in sexual activity and as such members should be careful and resort to condom use to prevent HIV and Aids, sexually transmitted infections and unwanted pregnancies.

However, the suggestions left tongues wagging in the Christian community.

“That is blasphemous. Why inside bibles, the holy book of God who condemns, adultery and fornication, which is mostly what transpires in hotels.

“Why not just suggest that they be placed on beds if you really want to use them that way, lets not use the Bible in vain utterances. Respect the holy Book. If you had suggested the Koran, Muslims would have had your head by now,” said Vimbai Tembo, a member of the Apostolic Faith Mission in Zimbabwe.

More than three decades have gone by since the emergence of HIV, which causes Aids, yet religious leaders in Zimbabwe still find it difficult to sensitise members about condom use or to negotiate safe sex.

A member of ZAOGA Abraham Munetsi in Highfield said it’s not possible to have condoms in the bibles adding that “The Word of God cannot and must not be associated with tools of adultery and fornication.”

Lack of knowledge and sensitization on HIV and Aids by religious leaders has been said to be exacerbating the spread of the pandemic in the country.

Medical experts say unprotected sex has been found to be the major driver of the pandemic, with 90 percent of infections resulting from such practices. And the problem is affecting almost all age groups, with church members also having a fair share.

But members of the Christian community insisted that condoms should not be put in bibles.

“That’s Satanic to put condoms in Bibles. Even so Come Lord Jesus. Come and take thy waiting people home. Why in the Holy Bible? Please if you want to play with God then do it at a very big risk. Some mocked God and guess what happened?”

In Zimbabwe some church leaders have been accused of ignoring the HIV/AIDS epidemic among its members and failing to create a platform that allows open discussions about HIV and AIDS.

Maxwell Kapachawo a pastor of Abandoned Grace Ministries became the first religious figure in 2005 to go public about being HIV positive.

He is actively involved in the activities of the Zimbabwean chapter of the International Network of Religious Leaders Living with or personally affected by HIV and AIDS.