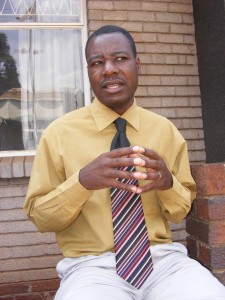 Pastor Charles Charamba spent the whole night before his final examination a few months ago in the study room.

For the past four years, he had sailed through the levels of his Bachelor of Arts in Music (Jazz) at the Zimbabwe College of Music but, the last night of his studies was turbulent.

He soldiered on — perusing, memorising and scribbling as the night wore away. His efforts paid off in a big way, as he became the best student in his class. He graduated last month.

“I had never felt so much pressure,” recounted Pastor Charamba.

“I went into the study room after supper and pressure blew sleep out of my head. I was anxious. I had to finish the dissertation and I also had to revise for the last examination.

“I had not realised that a whole night could be that short. I was surprised to realise it was already 6am when I checked my clock. I had to go straight to the bathroom and prepare for the day ahead.

“I thank God that I managed to finish everything that I was supposed to do that night. It was a big challenge but I am happy I made it.”

Pastor Charamba said his first days at college were also a challenge because he had to swallow his pride and begin doing music theory from the very first level.

“I could have gone to a foreign university, where I would not be recognised as a popular musician but I did not want to part with my family and fans.”

The musician said he was inspired to study music after he was approached by a fan in the United States who wanted his music in a transcribed form.

“We had finished our performance when a certain guy came up to me and asked for my music. I sent someone to take a CD and we gave him. He stood there for a long time and we chatted. It was apparent that he was waiting for something, but we had no idea what more he wanted when we had given him the music that he had requested for.

“On our parting note, the gentleman said ‘I hope next time we meet I will be able to get the music’. We did not understand him until I met another man at our next show in the US. He told me that when people request for music in that part of the world, they mean transcribed songs.”

That experience made Pastor Charamba very sad. He realised that besides the fame and popularity at home, he still lacked a lot to communicate with serious musicians at an international level.

Despite the challenges that he faced during the studies, Pastor Charamba is now a happy man. He lost a lot of income as he turned down all international shows and many local gigs. But he does not regret it.

“It is fulfilling to know that you can fit in any culture and your music can be read in a universal language. I am now ready to resume international tours and work on new material with an enlightened mind.”

Charambas head to the UK for gospel gala