Politicians warned by prophet against political violence in the next election

Prophet Bothwell Phiri of River of Life Churchsays politicians who will perpetrate violence in the next election in Zimbabwe, will not go unpunished unlike in 2008. The man of 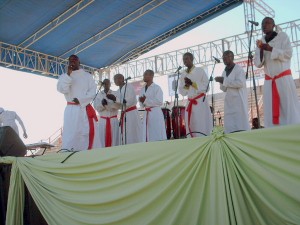 God said this while addressing thousands who had gathered at Bulawayo’s giant Barbourfields Stadium for a national peace prayer last Saturday. The prayer, attended by representatives of political parties, was organised by Bulawayo church leaders.

“God cannot be quiet when you are busy destroying the nation,” said Prophet Phiri. “If people are promoting violence over our nation and Jehovah does not answer them by fire in this season then you will know that I did not speak as a man of God. Since it will not happen that Jehovah will keep silent when his people are being destroyed.”

Blaming polarization of Zimbabweans on the basis of political affiliations, Prophet Phiri added: “You see immediately, you can tell from the quietness the fear is upon people’s lives. Even the pastors are quiet because no one wants to be seen saying something that is “politically incorrect.” But we are not speaking politics today. We are declaring the divine judgment of Jehovah over our nation.”

The prophet also said that in 2008 the Most High spoke to him and informed him that Zimbabwe was to become a nation of restoration that would also forgive one another. “We have a peace and reconciliation commission which is going absolutely nowhere because politicians want to define what the mandate is. You cannot ask for forgiveness on your own terms,” he added.