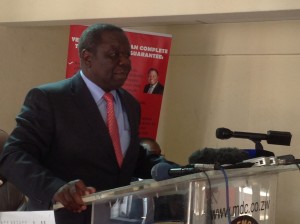 In an end-of-year statement, Tsvangirai urged Zimbabweans to pray for Mugabe, 90, “so that he understands the enormity of the national plight”.

The Movement for Democratic Change leader said that Zimbabweans were “living under a heavy cloud of despondency” as job losses and company closures mounted.

He offered an apology for his party’s underachievement during the four years of the previous coalition government, claiming that Mugabe’s Zanu PF “stood in the way of everything progressive”.

Tsvangirai has had a difficult 2014 following his loss to Mugabe in elections last year.

Biti and his supporters have now joined forces with another MDC faction led by Welshman Ncube.

Reports that Tsvangirai and his party are in financial difficulties have not helped his reputation.

Attention has been diverted in recent weeks from the MDC’s woes to the infighting within Zanu PF and the political rise of Mugabe’s wife Grace.

Meanwhile the former premier called for the secession of hostilities with Ncube and Biti, urging them to return to the “big tent for the end-game”, adding the time to “mobilise Zimbabweans is now”.

“The time to unite and mobilize the people of Zimbabwe has come for the end game is beckoning, I for one would be prepared to consider that very seriously and the sooner people realize the importance to unite and to form a united force the better,” he said.

“The MDC believes in the unity of purpose. We realise our colleagues organising themselves into a coalition but we say here is that there is a big tent approach that all democratic forces must unite regardless of their political opinions and egos”.