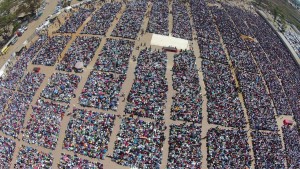 Officials believed to be from Zimbabwe Revenue Authority (ZIMRA) yesterday caused a scene at the Prophetic Healing and Deliverance (PHD) Ministries headquarters, demanding to see Prophet Walter Magaya over his numerous donations.

Zimra officials are understood to have demanded a list of people who have benefited from Prophet Magaya’s donations since he started his PHD church. The officials were not interested in being helped by PHD officials who handle information that might be of use to Zimra and instead demanded to see Prophet Magaya, who was not there at that time. He only turned up later for the Sunday Service.

While there was no immediate comment from the Revenue Authority, Prophet Magaya last night confirmed receiving news of the raid. He believes Zimra’s guys were triggered into haunting him after his highly publicised donations to Parirenyatwa Group of Hospitals, the First Lady and national soccer teams. Prophet Magaya added that Zimra’s actions will discourage charity work as PHD prayer partners were disturbed by yesterday’s incident.

“I have not been given an outline of what Zimra want from me and on what basis. But from what is coming out, our donations to charity sparked this raid. Our gesture in buying First Lady Amai Grace Mugabe’s book and the donation to Parirenyatwa sparked the unfortunate incident.

“This is God’s ministry and all the funds being channelled to help people are coming from people who grasped the vision of my ministry. I have always put it on record that PHD prayer partners are behind all this,” said the visibly shaken Prophet Magaya.

While acknowledging Zimra as the revenue authority, Prophet Magaya was not happy with what he called “unprofessional” behaviour by the officials who reportedly clashed with his followers.

“I am told that when they arrived, they were rude and refused to be attended to by relevant people within the PDH structures with regards to whatever information they needed pertaining the donations. Instead, I am told they were saying ‘toda kuona anozviti Magaya wacho’. It disturbed PDH prayer partners so much and they asked me if helping people is what Zimra are against or they are meant to destroy the ministry that God has established.

“Among their demands is a full list of the people I helped with money and you wonder where their question is coming from and what they are up to,” said Prophet Magaya.