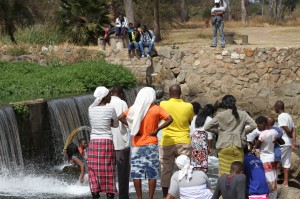 Members of the unidentified Apostolic sect waiting to be baptised with dirty water (photo: S Mlambo).

Mashonaland East Province Acting Police Spokesperson Assistant Inspector Tendai Mwanza confirmed the incident in which Susan Kandros dived into the river while in trance during a religious cleansing ceremony and died.

“I confirm the death of Kandros a prophetess who drowned at Nyaguwe River during a cleansing process,” said Mwanza.

According to police, on the fateful day Kandros, who is a self-proclaimed prophetess, held a prayer and cleansing ceremony with eight other fellow church members at Nyaguwe River Bridge in Juru.

After the ceremony it is said that the now deceased fell into a trance and divide into the river and swam downstream to a deep end.

Upon sensing danger it is reported that one of the church members Joseph Pepa (39)  dived into the deep water in a bid to rescue Kandros. Unfortunately she drowned before being rescued and her body could not be located.

Instead of reporting the matter to police, it is said the church members held a night vigil expecting her to emerge from the waters but it was a futile exercise.

A report was made at Juru police, the following day and the Sub-Aqua unit came and retrieved the body before taking it Murehwa Hospital for postmortem.

“We appeal to the members of the public to desist from diving and swim in deep waters to avoid such kind of tragic losses,” said Mwanza.