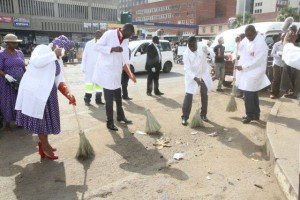 Prophet Emmanuel Makandiwa during a clean up campaign in Harare (B Kanamhora).

Residents in Harare have hailed United Family International Church leader   prophet Emmanuel Makandiwa for leading thousands of his church members in a massive clean-up campaign in Harare which covered the city’s business area over the weekend.

Harare residents also commended Prophet Makandiwa for being practical in his teachings and actions.

“We were not expecting that a person like Makandiwa could come and sweep at a bus terminus,” said Mr Norman Penzwa, who operates at Simon Muzenda terminus.

One Tafadzwa Madziya said this was a clear sign that the man understands the word of God.

“It shows that he is a humble man and the clean-up campaign is a good initiative and a challenge to all of us.”

Popular Harare socialite Wanisai Mutandwa said it was good that the man of God understand the popular verse that says cleanliness is next to Godlyness.

The clean-up campaign was supported by the Harare City Council, which provided 17 refuse trucks.

The church members were divided into 30 groups comprising hundreds, with each group assigned to a bus terminus or certain streets to sweep and pick up litter.

At Simon Vengai Muzenda Street (formerly Fourth Street) bus terminus, business came to a standstill as people jostled to get a glimpse of Prophet Makandiwa and his wife, who joined a group assigned to clean up the area.

Speaking at a church service at the City Sports Centre just before the exercise, Prophet Makandiwa said there was need for collective effort to achieve a healthy and litter-free country.

“As I was driving in our city I saw a situation that does not require money, but which we can address,” he said. “It’s a programme that requires energy and commitment.I feel there is something practical that we can do for our nation. We have more than 30 places that need to be cleaned.

“As we pray for the nation, we also realise that there are things that require effort and commitment, so in this case we are going to go in every part of the city picking up litter and sweeping every dirty area we will come across.”

Prophet Makandiwa said the Harare City Council was doing its best to remove litter, but that too many people were littering compared to the number of workers it has for the job.