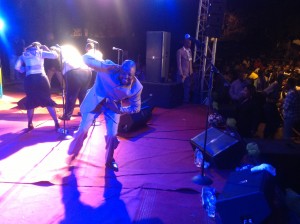 Solly Mahlangu stole the thunder at the fifth edition of the Open Heavens Gospel Crusade held at Harare Gardens on Saturday.(Photo: M.Chibaya).

It was a night to remember for the local Christian community as visiting South African gospel sensation Solly Mahlangu stole the thunder at the fifth edition of the Open Heavens Gospel Crusade held at Harare Gardens on Saturday.

The crusade, which is an annual event, was hosted by Apostolic Faith Mission Mabelreign’s Shiloh Word Miracle Centre Assembly.

The award-winning Mahlangu set the venue ablaze with an electrifying performance before an appreciative crowd.

He was supported by Pianos Jaravaza, Dudu Manhenga, Worship Addicts, Sebastian Magacha, Mathias Mhere and Pastor Charles and his wife Olivia Charamba, who later paved way for the visiting Mahlangu.

Clad in a cream suit, the Obrigado singer took to the stage at around 7:30pm and wasted no time getting straight into business.

Mahlangu, who was performing in the country for the second time, had a polished show throughout his two-hour appearance.

His display was consistent and fans could not help, but marvel at the talent of the musician belting out hit songs like Mwamba Mwamba, chart-topping Obrigado, Sikwembu Samadima, Wahamba Nathi and Emmanuel among others.

Meanwhile, the visionary and brainchild of the event Reverend Onismor Sasa said he was overwhelmed by the success of the show.

“I would like to thank the Almighty for allowing everything that we had planned to go accordingly.

“The high turnout really amazed me and I need to thank all those who graced the event for their support,” Sasa said.

“Thumbs up to both Mahlangu and our local artistes for the great performance and their support for the event to be such a successful one,” he added.