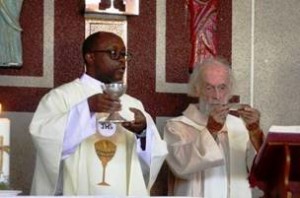 Former St Ignatius College students convened to celebrate with Fr. Anthony Watsham SJ on his 92nd birthday which also marked the launch of a revitalized Alumni Association at the college on the 23rd of April.

The Jesuit Provincial, Fr Chiedza Chimhanda SJ, concelebrated the mass with Fr Watsham SJ in honour of a humble man who strove for the greater good and committed to over four decades of teaching at the hill top.

In 1967, Fr Watsham SJ became part of the impressive St Ignatius College after its establishment in 1962 and moved briefly for about 20 years to Macheke, before he made his second coming remained, to this day. Fr. Watsham has taught Biology for 28 years before retiring in 1994.

In his service as a biology teacher, he has received international honors such as the election for a Fellow of the Royal Entomological Society and his work in Biology has unheralded accolades, in particular his numerous products based around the globe working in as medical doctors, scientists, pharmacists, molecular specialists, research scientists, entomology, education, community, national affairs and several others.

Addressing the congregants attending the mass, the Interim Chairperson of the Alumni Association, Mr. William Mandinde praised Fr Watsham SJ as a simple man who has influenced many students to greatness through imparting rare life skills and laid their spiritual upbringing.

He further said the Alumni Association is there to aid their former school’s development and will continue contributing in every way they can.

Dr. Walter Mangezi, testified that he was inspired by Fr Watsham’s biology lessons which moved him from his intended career path of engineering to the calling in the field of medicine.

Dr Anna Mary Nyakabau, one among over 35 doctors and pharmacists mentored by Fr Watsham SJ said she felt challenged by his words that no female doctor had emerged from his classes and praised him for remaining a mentor and an inspiration in her life.