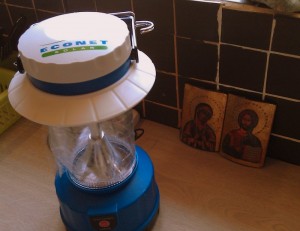 The Bible calls on all Christians to be the light and the salt of the earth. One of Africa’s leading businessmen and publicly open Christians, Mr Strive Masiyiwa, founder of an international telecommunications company Econet, has done just that.

Masiyiwa’s business acumen is as well-known as his philanthropic nature and his faith has seen him get involved in various poverty alleviation projeccts including working with the Bill and Melinda Gates Foundation and sitting on the board of trustees at the Rockefeller Foundation. Apart from founding the Capernaum Trust with his wife (a fund that pays school fees for almost 30, 000 orphans), Masiyiwa works closely with other charities including The Nelson Mandela Foundation and Kofi Annan’s Alliance For A Green Revolution in Africa.

His company Econet will be launching The Econet Solar Home Power Station in the first half of the coming year. The revolutionary pre-paid solar initiative is set to be on the market no later than mid- 2012 and it is expected to be popular in countries like Nigeria, where electricity supplies are inefficient and unreliable.

A range of solar-power products are already on the market but often the up-front cost of purchasing the equipment is too high for those who would like and would benefit from the product. Econet Solar’s approach which will allow its customers to take the Home Power Station at a small upfront cost and pay for electricity via prepaid airtime, on a pay per use basis. The Econet Solar Home Power Station includes four LED lights, the station controller, a battery, a solar panel, cabling and a cell phone charger. It has been designed to light up to four rooms of 3x3m for up to five hours a day using the power of the sun. The power station is designed for residents in areas where there is no access to the grid or any source of sustainable, reliable power but even those living in the urban areas will find the Econet Solar Home Power Station useful because of the ongoing power outages that have forced many Zimbabweans to purchase noisy, diesel-powered generators.

The recently ended COP-17 climate change conference brought the need for more sustainable living to the fore, with industrial nations being challenged to reduce their carbon emissions and provide more environmentally friendly manufacturing processes. As a Christian and as a businessman, Strive Masiyiwa has shown his love for this continent and if he continues down this path there is no doubt that he will go down in  history as an iconic African who brought meaningful change to the motherland.

More and more Christians are following in their faith with the knowledge that living an impactful life is the greatest testimony and Strive Masiyiwa is a good example of this. Like Martha who served Jesus diligently and precisely, we need to be making Christ the central figure  in our lives both at home and at work.