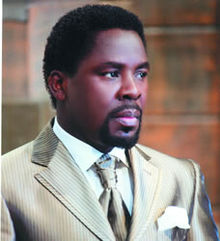 According to Nehanda Radio that quotes the Daily News, President Robert Mugabe’s party, Zanu-PF, spokesperson Rugare Gumbo said the fact that prophet Temitope Joshua, a Nigerian clergyman, was predicting recently the death of an African head of state made the prophet’s claim unpalatable and absurd. “It goes against tradition. You do not talk about such things. It is taboo. I do not believe in these prophecies, visions and dreams,” Gumbo said.

Commonly referred to as TB Joshua and one of Nigeria’s richest and most philanthropic religious leaders, this prophet is worth between USD 10-15million and runs the Synagogue Church of All Nations, a congregation he founded in 1987. Last year he donated an assortment of goodies to inmates at Zimbabwe’s Khami Maximum Prison as part of his 48th birthday commemorations. The donation was handed to the inmates by the local  friends of Emmanuel TV, a channel Joshua operates from Lagos.

President Mugabe, who turns 88 in a about a week, is the oldest president on the African continent. The veteran leader has been in power since 1980 when the country gained independence from Britain.

TB Joshua, some of whose prophecies have come to pass, did not name the head of state he was referring to. He also failed to give the location of the leader but promised to do so in the near future. “God loves us, you should pray for one African head of state, when I say president…again the sickness is likely to take his life; sudden death, it could be sickness in the body for a long time but God showed me the country and the place but I’m not here to say anything like that.”

“When it’s too close and there is nothing I can do about it, I will mention it clear, the place, the country and the person so that they can see what they can do to rescue him. Okay it’s very close, Jesus loves us. Wave your hand, wave your hand,” TB Joshua said.

The prophecy immediately attracted the attention of Zimbabweans who began posting their own conclusions on social networks.

A Daily News reader who identified himself as Sibanda said this was not the first time Joshua had prophesied about the death of a famous person. He said Joshua’s prophecy was bound to come true if the example of his previous prophecies, such as the death of pop music icon Michael Jackson were anything to go by.

Sibanda said TB Joshua had previously talked about Zimbabwe in his sermons. “There is a prophecy that was made on the 8th of January [2012], Prophet TB Joshua invited people to pray for Zimbabwe, pray for its leader “because if something happens to the leader there I see a crisis.”

The Zimbabwe Mail‘s Alexander Rusero was asking himself in a piece yesterday, “Why is Zanu-PF already firing missiles to such a prophecy that is yet to come to pass? Wouldn’t the very same people rubbishing the prophecy order a live broadcast of say a sermon or another prophecy which would have otherwise foretold the prolonged stay in power of Zanu-PF or even of President Mugabe? Aren’t these the same people who engaged in a silly act typical of a Nigerian African movie of being misled by a “traditional healer” that a rock was oozing diesel in Chinhoyi?”

He continues reflecting, “The party should rather be preoccupied by more important matters of strategic political issues ahead of a treacherous election that is spelling imminent doom of the party. Attacks of TB Joshua’s prophecy by Zanu-PF exposes the party’s desperation to make Mugabe stay in power. But Mugabe like any other normal individual deserves to rest and somewhat write books which he has promised the nation for time immemorial now.

Zanu-PF panic mode is an indicator of succession quandary in the party. ..Factions in the party would rather unite under Mugabe and continue outwitting each other in power games for after him they are definitely convinced that Zanu-PF would be no more. If Mugabe is to openly ask who has ambitions to succeed him he will not find one, but when others appear to say time is up for Mugabe, all sorts of name calling are directed towards them.

That’s typical of human beings, they only agreed that Jesus was indeed the son of God whilst he hung on the cross taking the last breath of his earthly life. Wasn’t it the same Jesus who said a prophet is without honour in his own country? Why all the fuss on TB Joshua’s predictions, can’t we just wait?”