According to ZimDaily.com, Pastor Charles Charamba and The Fishers of Men put up a spirited performance in the Harare Gardens at the beginning of this month that left the crowd asking for more. Harare Gardens was filled to capacity with fans singing along to his songs such as “Machira Chete”, “Kutambira Mwari”, “Gomo ReMoriya” and “Zvipo Zvinoshamisa” from his latest album “Pashoko Pangoma”. 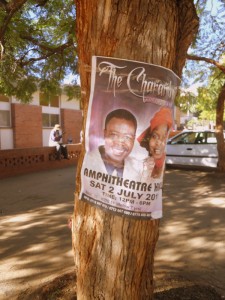 The Charambas are on a Zimbabwe tour. A poster announcing their July, 2 performance in Bulawayo.

Fans fell on each other as Pastor Charamba went into the crowd during his performance.The family show saw children, parents, grandmothers and youths singing along and dancing in unison.

Former manager for the Charambas and MC at the show, Rodger Jeffrey, known as Uncle Jeffrey, said the Charambas were ministers of God whose music touches hearts and changes lives.“Gospel music is powerful, it unites families, builds broken homes and those who are sick are also healed,” he said.

Jeffrey urged Charambas’ fans to continue supporting the man for the music that uplifts souls. Pastor Charamba promised his fans a new version of his 2007 New Testament album.

“We have redone the 2007 New Testament album and we are asking our fans to come forward with the old cases and we will give them the new version of the album,” he said.

Pastor Charamba showed gratitude to his loyal fans by giving out CDs to some of his fans. He also encouraged fans to be loyal to God. “We are very grateful for your support, may God bless you,” he said.

The Charambas are arguably the best selling gospel artists in Zimbabwe. Their music is loaded with messages laced with sing along tunes.

The Charambas are touring Zimbabwe. They are expected in Bulawayo on July, 2.

One Response to The Charambas, gospel music masters, tour Zimbabwe