Reprinted from The Southern Eye , with minor additions 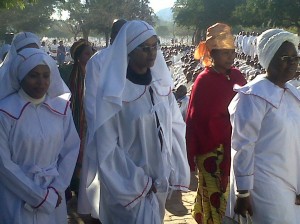 President Robert Mugabe yesterday said he was inspired by the Holy Spirit to woo thousands of apostolic sect members to his party ahead of elections due on July 31.

The President, speaking at Marange, dumped his designer suit for a white garment and carried a staff, like members of the apostolic sect.

To round off the apostolic look, Mugabe and his wife Grace both walked with no shoes. The First Lady sat on the ground as the President delivered his address.

“Your plight is within my heart and we will ensure your wishes are fulfilled once Zanu PF is voted into government,” the President, a staunch Catholic, said.

He took a swipe at the MDCs, whom he accused of representing the interests of the whites. The Zanu PF leader said the Bible did not say wealth should be in the hands of whites, insisting that the “land, minerals, animals and owls”, belonged to the blacks. Mugabe also took time to lecture the apostolic members on homosexuality, saying it was an insult to dogs, to compare them to gays.

“A woman and a woman cannot marry. Marriage is between a man and a woman. That is how we can have children,” he said, attacking the Anglicans, whom he accused of condoning gay marriages.

The President has not hidden his disdain for homosexuality, once describing them as worse than pigs and dogs.

Across the province at Sakubva Stadium in Mutare, Prime Minister Morgan Tsvangirai promised a “new responsible and selfless leadership”.

“If we check on Mugabe’s record in Zimbabwe, he has literally destroyed this country,” he said. “Today’s enemy is no longer yesterday’s enemy. Today we are fighting poverty and underdevelopment.”

Tsvangirai said the culture of governance should change, as the country deserved a leadership that assured and guaranteed freedom of its citizens.