The return of Blessing Shumba 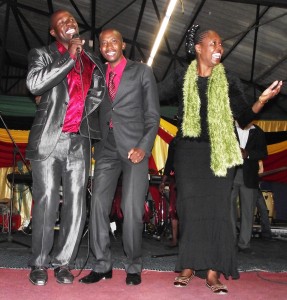 He was criticised for wrong reasons. His silence was described in many ways by both his fans and haters.

For more than two years, during his peak, Blessing Shumba turned his back against the recording studio for a number of reasons.

Firstly he was deserted by his most trusted lieutenants, the Ngolomi Brothers, Lyton and Brian, who doubled as producers and band members. The Ngolomis have found favour in the eyes of gospel musician Mathias Mhere, who was rising by then, and perhaps overshadowing Shumba in the process.

The love of money saw Shumba being isolated by the experienced Ngolomis and left with nothing except his wife Pauline as a band member.

Pauline who helped Bethany Pasinewako as a backing vocalist had learnt a little by then.

Mhere, who by then was riding high on the album that carried the hit song Favour, became the new attraction that saw the Ngolomis, his producers, joining him.

Shumba was dumped and his music career affected. Shumba, often described as the most humble musician, started from scratch and built another band in his hometown of Mutare.

The Handina Mhaka hitmaker is back. If the audience’s response to the new 11-track album Holy Psalms Vol 1 Ndiye Jesu is anything to go by, then Shumba is back with a bang. “I had to start afresh with a new band and I am happy that they lived up to expectations. I was left alone, with my wife, but we soldiered on,” Shumba told RelZim.

The latest offering is laden with scintillating songs laced by his usual well-crafted lyrics, with some of the songs meant to correct social ills in society. Drifting away from the product of his former producers, Shumba’s musical beat, from live instrumentation, is now a bit faster than before.

The album was co-produced by Mutare-based Olin Anderson of Kunashe Studios and Harare-based Charles Aibeki of Divine Records.

His wife contributed on songs Mwari Wangu and Chikuru Rudo where she led with vocals. “I had to take my time to come up with this album. I cannot say it is the best, though I put an effort. It is for the audience to judge. I am just a gospel musician who preaches the word through music,” said Shumba who is also an electrician by profession.

Shumba rose to stardom after the release of his debut album Ishe Wazvose in 2008.

He became a force to reckon with on the local showbiz circuit in 2011 after his song Mufaro from the award-winning album NdiMwari came second in the Radio Zimbabwe Coca-Cola Pimped Up and Ride Top 50.

Shumba: An electrician, farmer and musician