reprinted from The Herald 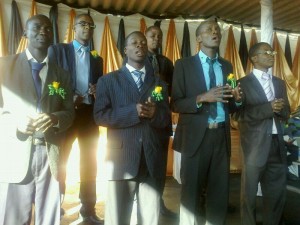 Tsuri Yedenga, has broken new ground by singing in hospitals, prisons, funerals, orphanages and other social places — all for a good cause.

A local a cappella gospel group, Tsuri Yedenga, has broken new ground by singing in hospitals, prisons, funerals, orphanages and other social places — all for a good cause.

Formed by Joseph Maswela, 34, in 2003, the group has become the favorite of organisations like the Zimbabwe Republic Police and the Zimbabwe Prison Services who hire them to perform for inmates and other functions. “We have performed at the Police Commissioner-General’s Christmas Cheer Fund as well as well as for inmates at Mutoko Prison and Chikurubi Farm Prison,” Maswela said.

But what motivates them to engage in such charitable gestures when others are busy singing for a fee? “It is because of our Christian background. I am a member of the Seventh-Day Adventist Church. And as a Christian-based group, we decided that we should preach the word of God to those who need it most. This, however, does not mean that we don’t perform at other functions like weddings because we have songs that appeal to all occasions,” he said.

Tsuri Yedenga released their first album “Mwari Arwadziwa Nezvitadzo” whose title is a reflection of God’s disappointment with a world characterised by sin. It was recorded at Media for Development but Tsuri Yedenga is responsible for marketing the album.

“We are currently working on our second album ‘Mbiri Kuna Mwari.’ It is our wish that people repent because we are living in challenging times,” Maswela said.

Born on May 1978 in Shurugwi (about 350 km south of Harare), he started singing in the school choir at Matamba Primary School in Shurugwi. After high school at Tongogara High, Maswela formed his first music outfit the New Accord in 1995. He then relocated to Harare where he later founded Tsuri Yedenga.

Religious leaders have called for the scrapping of the death penalty