reprinted from cherokeetribune.com by Geoff Folsom, with abridgements and additions

A group of seven people visited  the village of Mutambara in Manicaland  for a week last September, where they checked in on the Hope Center that Acworth United Methodist Church helped build. 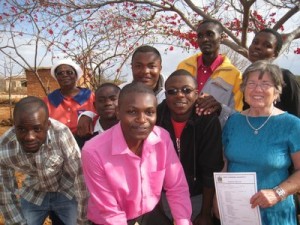 Seven members of Acworth United Methodist Church recently returned from a mission trip to Africa. Church members helped build a Hope Center in Zimbabwe and are planning a health clinic in Malawi.  Church member Shirley Rose of Acworth stands with some of the representatives of the Hope Center. Dorothy Mutambara, back left, runs the Hope Center. The men are students who have graduated from the Hope Center. Some have graduated from college and have jobs, and others are still in college. The Hope Center and Acworth UMC helps support them with tuition, books, and other essentials. Most — if not all — are orphans whose parents died from HIV. (Photo courtesy of Cherokee Tribune)

Rose had long worked to help build the Nyika Mutambara Hope Center, named for an African native and graduate of the Candler School of Theology at Emory University. The center is now run by his widow, Dorothy Mutambara, which provides food, clothing and school supplies and keeps 100 orphans in school — including six college students. 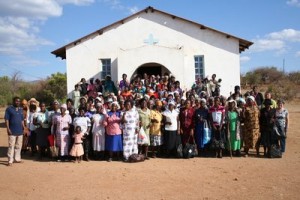 Participants in a retreat stand in front of the Hope Center. (Photo courtesy of Cherokee Tribune)

Rose was pleased that she was able to bring Acworth UMC’s pastor on a mission to Africa for the first time. “As soon as he got here, he wanted to go,” she said of Gwin, who came to Acworth UMC in early 2011. 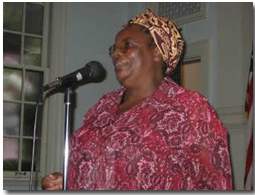 The US missionaries also visited Malawi, where they saw the site of a planned health clinic.