UNICEF to use part of Swedish grant for Vapostori health program

Acting United Nations Children’s Fund (UNICEF) Country Representative, Marc Rubin, says his organisation is going to make a scrutiny of the controversial health-seeking behavior of the  members of the apostolic groups to come up with an evidence-based program. 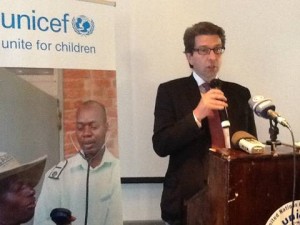 “This support will ensure that operational research on a wide range of development aspects (ranging from the mapping of every school in the country to the analysis of the health seeking behavior of the apostolic groups) leads to evidence-based program responses. It will ensure that this knowledge is used to influence national policies towards the best interest of the child, and that national budget is prioritized to protect and promote the rights of the most vulnerable and destitute children in Zimbabwe,” Rubin said.

Due to their reluctance to go to hospitals to seek medication, the group has seen most of their members dying from the diseases and a number of children have died due to immunization-related diseases. Members of the apostolic sects are known for resisting government health programmes such as immunization, as they believe that it is unholy to take medicines, pills and injections due to traditionally ingrained misconceptions.

In 2010 there was an international outcry when hundreds of children died from measles because the parents were not willing to have the children immunized.

Some members of these religious grioups believe conventional medicine is evil. This message is repeatedly preached to the church’s members, encouraging them to obey the message throughout their lives. They are to rely on the holy water (muteuro) and prayers from the church elders to cure illnesses and diseases. Members who seek modern medical care risk punishment from church leaders including suspension or excommunication.

Rubin was speaking at a grant-signing ceremony where the Government of Sweden bestowed a grant of USD 30, 4 million on the UNICEF in Zimbabwe to support the Government of Zimbabwe-UNICEF’s new country programme for years 2012-2015.

This contribution will help improve the lives of many women and children in Zimbabwe through critical support to the areas of health, HIV/AIDS, education, child protection, water, sanitation and hygiene.