reprinted with additions from The Standard by Jennifer Dube

A branch of the United Assemblies Africa Church situated in Chivhu (146 km south of Harare) has embarked on a project to rescue children who are facing abuse in the local community while also caring for orphans. 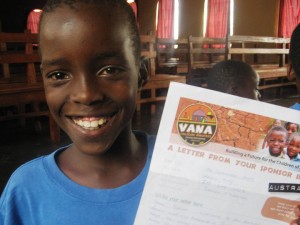 A total of 23 children aged between 2 and 18 years are currently under the care of Vana Orphanage built by the church in the small agricultural town. “A lot happens to children, especially orphans left in the care of relatives who may fail to view them as children just like their own,” UAA’s pastor Makoni Goredema said. “You may find a nine-year-old being made to mould bricks on behalf of a relative instead of going to school with his peers.”

The church has built three houses for the children, with four boys and four girls living in each house under the care of a grown-up woman who acts as their foster mother.

“We hope that the children will go back to their relatives when they are 18 years old,” Goredema said. “It is unfortunate that we do not know the relatives of some of the children, but we continue looking for them.”

The home was started in 2009 and the UAA intends to build a total of 40 houses to accommodate 320 children on the piece of land the church got from the council.

The church also pays school fees for other disadvantaged children who live with their relatives in Chivhu. It has a feeding scheme where the needy children eat lunch at the orphanage before proceeding to class or going home. “We believe that a child should have at least one decent meal that can keep him or her going until the next day,” Goredema said.

Goredema, a former trader in sculptures, said he first considered starting an orphanage for his church in 2006 when he noticed that some members of the community were often ill or mentally unstable, making it difficult for them to take appropriate care of their children.

The 44-year-old father of four, Goredema studied a model of an orphanage in Uganda and decided to duplicate it in Zimbabwe. “Called Watoto, which means ‘Vana’, the orphanage has many houses and accommodates more than 1,000 children,” he said. “We aspire to do that and even build a library and other facilities for the children because people in other countries even have universities for orphans.”